Science doesn’t always work this way, but sometimes it does, and it would be good if it did more often.

The phonex had nothing on the ivory-billed woodpecker.
It is hard to keep track of how many times this near-mythic bird, the largest American woodpecker and a poignant symbol of extinction and disappearing forests, has been lost, and then found. Now it is found again.
Even the most skeptical ornithologists now agree. They say newly presented recordings show that at least two of the birds are living in Arkansas
Richard O. Brum, an ornithologist at Yale University and one of several scientists who had challenged the most recently claimed rediscovery of the ivory bill, said Monday after listening to the tape recordings that he was not “strongly convinced that there is at least a pair of ivory bills out there.”
Mark B. Robbins, an ornithologist at the University of Kansas, who had also been a skeptic, listened to the same recordings with a graduate students and said, “We were absolutely stunned.”

Schools: Save cash
Teaching intelligent design exclusively would allow us to sell off a lot of “scientific” lab equipment and get rid of all of our grossly overpaid “science” teachers.
Imagine the savings if we could hire people who had the common sense to answer that “God did that” to every scientific inquiry. We don’t need to limit intelligent design merely to the question of the origins of humanity, either. It’s such a tidy theory that it can explain just about everything.
It can explain the 250,000 humans killed by the December tsunami. It can explain AIDS. It can explain cancer. It can explain 9/11.
Why bother studying anything at all when we already have the answer?
Dan Mundt, Denison, Iowa

The Omaha By Design plan adopted by the City of Omaha envisions 72nd and Dodge framed with eight 10-story buildings and other taller structures stretching to a large residential complex at 76th Street. The drawings don’t resemble Bourn’s strip malls.
Wilke said he has seen the plan.
“That kind of visionary thinking is fun to engage in, but I don’t think it’s market-based,” he said. Another developer might see that as possible, he said, and Bourn Partners likes to do that kind of high-density, mixed-use development, but the company doesn’t see this part of the Omaha market as ready for that yet.
“We think the suburban scale is still what the market wants in that area,” Wilke said. (p. 2D)

Business at the city-owned Hilton Omaha is expected next year to fall $2 million short of generating the cash needed to cover its costs.
…
When the city built the hotel, predictions assumed that hotel revenues – not tax dollars – would be sufficient to pay it off.

Oglala Lakota Leader Black Hawk, 1851; as quoted in a display at the Western Historic Trails Center in Council Bluffs, Iowa, designed and built by the National Park Service, and observed on 8/13/05.

It is hard to come up with a case against air conditioning in August. But Burt Folsom managed to do so at a Young America’s Foundation gathering on 8/1/05 (broadcast on CSPAN-2 on 8/2) He pointed out that before air conditioning, the stifling heat of a D.C. summer drove Congress out of town. After air conditioning, Congress stayed in session longer, passing more laws. 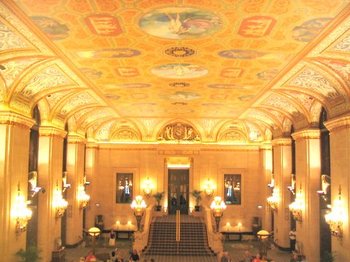 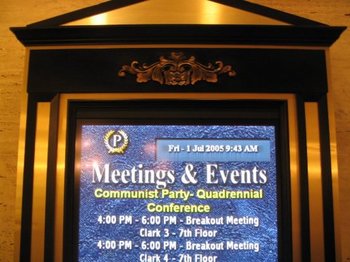 On July 1-3, 2005, the Communist Party held their Quadrennial Conference in Chicago’s plushly decadent Palmer House Hotel, as if to say: “Proletariat? We don’t need no steenking proletariat!”

From Debreu’s Presidential Address before the American Economic Association:

In the past two decades, economic theory has been carried away further by a seemingly irresistible current that can be explained only partly by the intellectual successes of its mathematization.
Essential to an attempt at a fuller explanation are the values imprinted on an economist by his study of mathematics. When a theorist who has been so typed judges his scholarly work, those values do not play a silent role; they may play a decisive role. The very choice of the questions to which he tries to find answers is influenced by his mathematical background. Thus, the danger is ever present that the part of economics will become secondary, if not marginal, in that judgment. (p. 5)