I cannot prove it to the skeptical, but after observing and interacting with our dachshund Willy almost every day for about 10 years, I strongly believe that he thinks and feels in ways that show he has a soul.
And I have no trouble believing that if a dachshund has a soul, then an elephant has one too.

(p. A21) Caitrin Nicol had an absorbing essay in The New Atlantis called “Do Elephants Have Souls?” Nicol quotes testimony from those who study elephant behavior. Here’s one elephant greeting a 51-year-old newcomer to her sanctuary:

“Everyone watched in joy and amazement as Tarra and Shirley intertwined trunks and made ‘purring’ noises at each other. Shirley very deliberately showed Tarra each injury she had sustained at the circus, and Tarra then gently moved her trunk over each injured part.”
Nicol not only asks whether this behavior suggests that elephants do have souls, she also illuminates what a soul is. The word is hard to define for many these days, but, Nicol notes, “when we talk about it, we all mean more or less the same thing: what it means for someone to bare it, for music to have it, for eyes to be the window to it, for it to be uplifted or depraved.”

Jenny’s fourth and fifth grade teacher, Mary K. Fox, ended a long battle with cancer on January 30, 2006. Here are our “Guest Book” entries:
February 1, 2006
You were a great teacher. I will miss you very much. I remember the first day you met Willy (my dog). You liked him very much. Willy will always remember you, and think of you as Jenny’s teacher.
Love, Jenny (and Willy)
Jenny Diamond (Omaha, NE )
February 1, 2006
We admired Mary’s strength and determination; her patience and good will.
Art & Jeanette Diamond (Omaha, NE ) 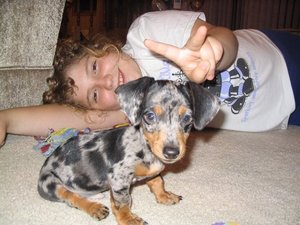 Willy is a miniature dachshund. Willy’s veterinarian has from the start urged us to have him neutered, but we have so far resisted the temptation to follow the politically correct practice.
I did not attend Willy’s most recent visit to the vet, but I am told that he was placed on the counter and given two shots. Little Willy was not fond of this activity, so after receiving the second shot, he lifted up a hind leg and peed on the floor. Observing this, the vet said ‘that’s what you have to expect from an intact male.’
Willy’s favorite activity is to chase after a ball that you throw for him. His favorite balls are racquetballs, because they are small enough for him to easily carry around and because they have a lot of bounce. But he is also happy to chase tennis balls, and when he sees a soccer ball, he goes beserk with enthusiasm. (When my daughter and I practice soccer in the backyard, little Willy switches to whichever side is most in need of help.)
Our miniature dachshund is a loyal, intelligent, rascally, affectionate, stubborn critter. My advice to little Willy: don’t ever let them take away your balls. 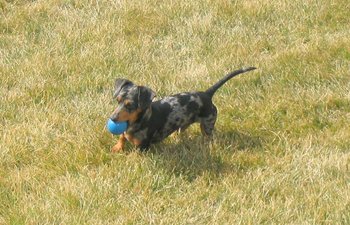