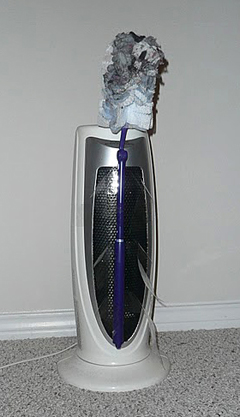 “A space heater with a feather duster qualified for Energy Star . . . as an air purifier.” Source of caption and photo: http://blogs.consumerreports.org/home/2010/03/gao-audit-energy-star-program-bogus-products-energy-use-consumer-reports-testing-best-appliances.html

Those who call for more government regulations to protect us, should deeply ponder the story quoted below.

(p. A16) WASHINGTON — Does a “gasoline-powered alarm clock” qualify for the EnergyStar label, the government stamp of approval for an energy-saving product?

Like more than a dozen other bogus products submitted for approval since last June by Congressional auditors posing as companies, it easily secured the label, according to a Congressional report to be issued Friday. So did an “air purifier” that was essentially an electric space heater with a feather duster pasted on top, the Government Accountability Office said.
In a nine-month study, four fictitious companies invented by the accountability office also sought EnergyStar status for some conventional devices like dehumidifiers and heat pump models that existed only on paper. The fake companies submitted data indicating that the models consumed 20 percent less energy than even the most efficient ones on the market. Yet those applications were mostly approved without a challenge or even questions, the report said.
Auditors concluded that the EnergyStar program was highly vulnerable to fraud.

(p. 3B) LINCOLN — MidAmerican Energy is suing the state after state officials grounded a $1.1 million sales tax refund the company expected on the purchase of a corporate jet.

Under Nebraska’s 1987 economic development act, LB 775, companies can get sales tax refunds for such aircraft.
But the Nebraska Department of Revenue rejected the refund because MidAmerican’s multimillion-dollar Falcon 50EX jet, purchased in 2004, was used to transport U.S. Sen. Ben Nelson, D-Neb., on a trip between Albany, Ga., and Omaha on Nov. 28, 2006.
Using such planes for fundraising or transporting an elected official disqualifies a company from getting the sales tax benefit, State Tax Commissioner Doug Ewald ruled, citing prohibitions in LB 775.
MidAmerican, an Iowa-based energy firm headed by Omaha businessman David Sokol, is appealing.
The company is asking the Lancaster County District Court to overturn the department’s March ruling.
MidAmerican argued that a single trip taken by Nelson should not be enough to deny the refund. It also maintained that the state, under LB 775, should have based its ruling on the intended purpose of the airplane and can test that use only when the plane is purchased.

For the full story, see:
Paul Hammel. “MidAmerican Sues State Over Tax Credit on Jet.” Omaha World-Herald (Friday, May 7, 2010): 3B.
(Note: the online version of the article was dated Thursday, May 6, 2010 and had the title “MidAmerica (sic) sues Neb. for refund.”) 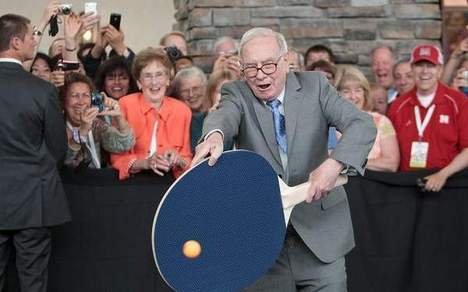 “Warren Buffett has a bit of an advantage in a game of table tennis Sunday with Ariel Hsing, the top U.S. table tennis under-20 player.” Source of caption and photo: online version of the Omaha World-Herald article quoted and cited below.

(p. 1D) Buffett and Munger had the 100 or so journalists and others at the press conference laughing at times.
. . .
(p. 3D) The press conference followed a festive day for Buffett, including a brunch attended by Berkshire managers, a few table tennis shots with U.S. under-20 champion Ariel Hsing of Milpitas, Calif., and a few hands of bridge with his regular partner, Susan Ogborn, and Berkshire executive Ajit Jain.
About 800 people watched the table tennis, many of them sitting in bleachers erected in the Regency Court shopping center courtyard.
After losing some quick points to Hsing, Buffett pulled out a paddle that extended nearly the width of the table, but he had no better luck.

The unsavory political practice known as “logrolling” is discussed in one of the public choice chapters of the Gwartney et al text that I use in my micro principles courses. Here is an apt example:

Roosevelt had some success charming more malleable politicians such as young Florida senator Claude Pepper. Roosevelt invited the wavering Pepper into the Oval Office and turned on the charm. It helped even more when he turned on the spigot. “The president,” Pepper recalled, “was not above a little logrolling, promising to help me win re-election in 1938 and, in my presence, notifying the army that he wanted to see some favorable action on a Florida canal project that I had been pushing.” Pepper ended up backing Roosevelt. 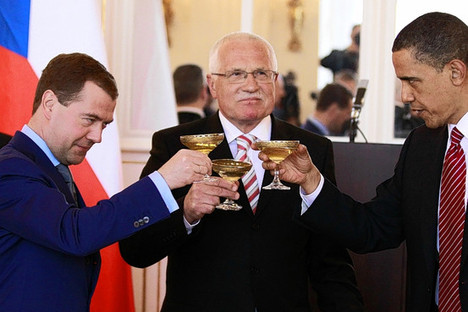 In the photo above, which of these three men would you want to sip champagne with? (Hint: the libertarian is in the middle.)

Nelson has said that he never asked for the exemption and that his goal all along was to provide relief for all states.
Tagged with the derisive moni­ker “Cornhusker kickback,” the arrangement quickly proved po­litically toxic.
. . .
Asked why he didn’t offer the same deal to every state from the start, Reid said, “Because I didn’t have it for everybody at that time. I thought I could get it as we moved along in the legisla­tion, and I did.”
Van Susteren said: “You’re telling me that when Ben Nelson got that, when the two of you sat down together, you said, ‘Ben, we’ll do it this way. … Nebraska’s got it now, but after we get this passed we’re going to go for ev­erybody?’ ” “No, no, no. He got this for him­self. He wanted it,” Reid said. 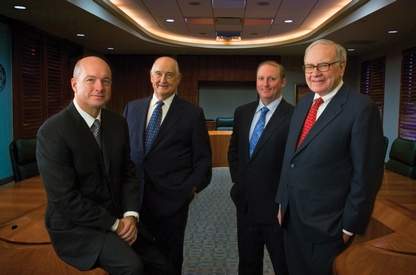 “To me, that is the ultimate answer if you want to reduce carbon dioxide,” Scott told about 150 people at a breakfast session of the Omaha chapter of the Association for Corporate Growth, held at Happy Hollow Club.
Solar and wind-generated electricity require government subsidies, Scott said. And because the 1979 accident at Three Mile Island, Pa., shut down nuclear energy construction in the United States, this country will have to buy its new nuclear-generating equipment from France and Japan, which dominate that industry, he said.
“Isn’t that a wonderful thing?” asked Scott, who also said electric vehicles eventually will capture a significant market.
The Three Mile Island accident “shook people up” even though no one was killed and the containment vessel worked as designed by engineers to prevent radioactive material from spreading, said Scott, chairman-emeritus of Peter Kiewit Sons’ Inc. and a director of several corporations, including Berkshire Hathaway Inc.
Kiewit has been involved in the energy industry for decades, he noted, and Berkshire’s energy division, MidAmerican Energy Holdings Co., has substantial wind farms in Iowa and several other states. But those wind farms are viable only because they operate under government rules that guarantee a return on investment, even with their higher costs, Scott said.

For the full story, see:
Steve Jordon. To Cut Carbon, Go Nuclear; It’s the Ultimate Answer for Reducing Emissions, the Kiewit Official Suggests in a Speech.” Omaha World-Herald (Friday, May 14, 2010): 1D-2D.
(Note: the online version of the article had the title “Scott: To go green, go nuclear.”)

(p. 116) Roosevelt’s social security plan created an array of problems. First, it retarded recovery from the Great Depression by contributing to unemployment. From 1937 to 1940. employers and employees were docked for social security, and that money was out of private hands and lying fallow in the treasury. Lloyd Peck of the Laundryowners National Association concluded, “The burden of this proposal for employers to carry, through a payroll tax, will act as a definite curb on business expansion, and will likely eliminate many businesses now on the verge of bankruptcy.”
. . .
(p. 117) When an accountant quizzed Roosevelt about the economic problems with social security, especially its tendency to create unemployment, he responded, “I guess you’re right on the economics, but those taxes were never a problem of economics. They are politics all the way through.” Roosevelt explained that “with those taxes in there, no damn politician can ever scrap my social security program. That’s why, as Roosevelt admitted, it’s “politics all the way through.” Most politicians, following Roosevelt’s lead, have taken delight in raising social security payouts and using that gift to plead for votes from the elderly at election time. 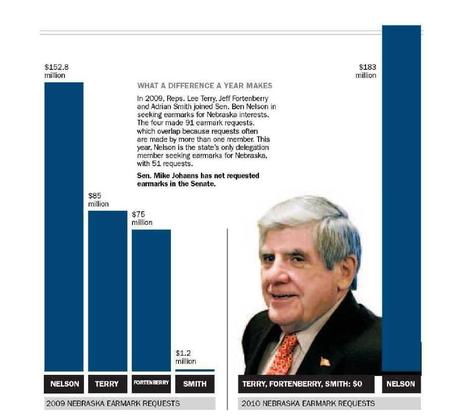 Source of graph and photo: online version of the Omaha World-Herald article quoted and cited below.

(p. 1A) WASHINGTON — In the battle to secure federal earmarks for Nebraska, Sen. Ben Nelson is feeling lonely this year.

The Nebraska Democrat is seeking 51 earmarks worth $183.1 million. The four other members of the Nebraska con­gressional delegation, all Republicans, have submitted no requests this year, three of them agreeing to a House GOP moratorium.
That’s a big change from 2009, when Rep. Lee Terry re­quested 11 earmarks totaling more than $85 million, Rep. Jeff Fortenberry sought 28 earmarks totaling more than $75 million and Rep. Adrian Smith sought two earmarks to­taling $1.2 million.
Sen. Mike Johanns has abstained from seeking earmarks since joining the Senate in 2009.
. . .
(p. 2A) Johanns has criticized ear­marking as a method of direct­ing taxpayer money based on lawmaker clout rather than a project’s merits. He said last week that the process would be better if lawmakers had to jus­tify their individual earmarks at hearings.

For the full story, see:
JOSEPH MORTON . “Nelson stands alone on earmark requests; He is seeking $183 million for Nebraska projects while the state’s GOP lawmakers sit out this round.” Omaha World-Herald (Tues., May 18, 2010): 1A & 2A.
(Note: ellipsis added.)

(p. A10) As they constructed the requirement that Americans have health insurance, Democrats in Congress took pains to make their bill as constitutionally impregnable as possible.

But despite the health care law’s elaborate scaffolding, attorneys general and governors from 20 states, all but one of them Republicans, have now joined as confident litigants in a bid to topple its central pillar. In the process, they hope to present the Supreme Court with a landmark opportunity to define the limits of federal authority, perhaps for generations.
In the seven weeks since the legislation passed, at least a dozen lawsuits have been filed in federal courts to challenge it, according to the Justice Department. But the case that could carry the most weight, and may be on the fastest track in the most advantageous venue, is the one filed in Pensacola, Fla., by state officials, just minutes after President Obama signed the bill.
Some legal scholars, including some who normally lean to the left, believe the states have identified the law’s weak spot and devised a credible theory for eviscerating it.
The power of their argument lies in questioning whether Congress can regulate inactivity — in this case by levying a tax penalty on those who do not obtain health insurance. If so, they ask, what would theoretically prevent the government from mandating all manner of acts in the national interest, say regular exercise or buying an American car?
. . .
Jonathan Turley, who teaches at George Washington University Law School, said that if forced to bet, he would predict that the courts would uphold the health care law. But Mr. Turley said that the federal government’s case was far from open-and-shut, and that he found the arguments against the mandate compelling.
“There are few cases in the history of the court system that have a more significant assertion of authority by the government,” said Mr. Turley, a civil libertarian who acknowledged being strange bedfellows with the conservative theorists behind the lawsuit. “This case, more than any other, may give the court sticker shock in terms of its impact on federalism.”