(p. A6) Gassy dinosaurs may have spewed so much methane into the air that it could have helped warm the climate tens of millions of years ago, when temperatures were much higher than today, a team of U.K. scientists reported Monday.
The stomach gas released each year by a group of long-necked, plant-eating dinosaurs, which included the world’s largest known land animals, may have equaled the total amount of methane produced every year today from all natural, agricultural and industrial sources, the researchers said Monday in the journal Current Biology. Methane, a greenhouse gas, is 23 times as effective at trapping heat in the atmosphere as carbon dioxide.
The new scientific work highlights the importance of wildlife, livestock and other natural sources of greenhouse-gas emissions in shaping the global climate.
As with cows, sheep and buffalo today, these plant-eating dinosaurs, known as sauropods, likely digested their leafy greens with the help of methane-producing microbes in their stomachs that fermented the plant matter after it was chewed and swallowed. Generally, other plant eaters and creatures that eat meat, including people, don’t digest their food this way and pass gas that is mostly nitrogen and carbon dioxide, with traces of methane and hydrogen.
Cattle belching and gas account for about 20% of U.S. methane emissions, according to the Environmental Protection Agency. 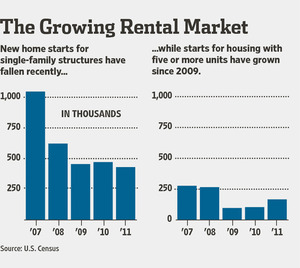 (p. C2) The U.S. economy needs the dynamism that renting enables as much as–if not more than–it needs the stability that ownership engenders. In the current economy, there are vast gulfs between the employment pictures in different regions and states, from 12% unemployment in Nevada to 3% unemployment in North Dakota. But a steelworker in Buffalo, or an underemployed construction worker in Las Vegas, can’t easily take his skills to where they are needed in North Dakota or Wyoming if he’s underwater on his mortgage. Economists, in fact, have found that there is frequently a correlation between persistently high local unemployment rates and high levels of homeownership.

For the full essay, see:
DANIEL GROSS. “Renting Prosperity; Americans are getting used to the idea of renting the good life, from cars to couture to homes. Daniel Gross explores our shift from a nation of owners to an economy permanently on the move–and how it will lead to the next boom..” The Wall Street Journal (Sat., May 5, 2012): C1 & C2.
(Note: the online version of the essay has the date May 4, 2012.)

(p. B2) First Solar’s solar-panel business, which is focused on large solar installations that feed electricity to power companies, is dependent on government subsidies awarded to such developments.
. . .
But some worry that First Solar isn’t well positioned for industry trends. The global solar-power market is moving toward rooftop solar-power systems, rather than the large-scale utility power plants where First Solar’s products are most effective, said Jesse Pichel, an analyst at Jefferies Group Inc.
“This was a market leader, but its technology is being usurped or surpassed by the Chinese,” said Mr. Pichel. “Their product is not competitive in the most economic and sustainable solar market, which is rooftop.” 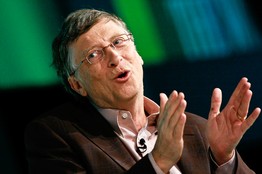 Bill Gates. Source of caption and photo: online version of the WSJ article quoted and cited below.

(p. R2) MR. GATES: . . .
The next miracle is nuclear energy. The plants that are out in the world today are basically generation-one and -two plants. There’s a few generation-three plants. The thing I’m investing in is a fourth-generation design.
MR. MURRAY: Can you explain a little bit about how this technology works?
MR. GATES: The part of uranium that’s fissile–when you hit it with a neutron, it splits in two–is about 0.7%. The reactors we have today are burning that 0.7%. There was a concept that you would do a different type of reactor that would make a bunch of another element called plutonium, and then you would pull that out and then you would burn that. That’s called breeding in a fast reactor. But plutonium is nuclear-weapons material, it’s messy, and the processing you have to get through is not only environmentally difficult, it’s extremely expensive.
The concept of the TerraPower reactor is that in the same reactor, you both burn and breed. Instead of making plutonium and then extracting it, we take uranium–the 99.3% that you normally don’t do anything with–we convert that and we burn it. The 99.3% is cheap as heck, and there’s a pile of it sitting in Paducah, Kentucky, that’s enough to power the United States for hundreds and hundreds of years.

(p. 199) Sam Walton used to joke that people thought he was an overnight success. “No,” he’d say, “they just heard of me last night.” 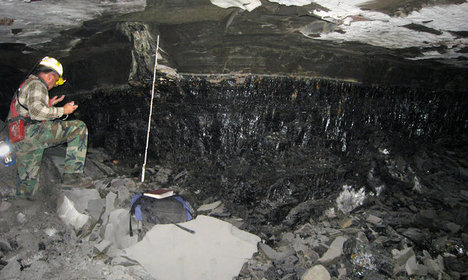 “SUBTERRANEAN; William A. DiMichele in the Springfield Coal. The dark mass is a coal seam; the lighter shale above is interrupted by a fossil tree stump.” Source of caption and photo: online version of the NYT article quoted and cited below.

(p. D3) In the clammy depths of a southern Illinois coal mine lies the largest fossil forest ever discovered, at least 50 times as extensive as the previous contender.
. . .
“Effectively you’ve got a lost world,” said Howard Falcon-Lang, a paleontologist at Royal Holloway, University of London, who has explored the site. “It’s the closest thing you’ll find to time travel,” he added.
. . .
The reach of the Springfield forest should allow scientists to undertake ecosystem-wide analyses in a way never before possible in landscapes so ancient, and such studies may help them predict the effects of global warming today.
“With our own CO2 rises and changes in climate,” said Scott D. Elrick, a team member from the Illinois State Geological Survey, “we can look at the past here and say, ‘It’s happened before.’ ”
Today, we burn the scale trees of the Carboniferous by the billions: they have all turned to coal. Newly discovered, the Springfield forest is already crumbling to bits, as coal-mine ceilings quickly do after exposure. But with continued mining, more ceilings are being revealed every day.
“You have to dig to find fossils, going inside the anatomy of the planet,” Dr. Johnson said. “Bill DiMichele realizes he has an entire industry digging for him, creating a tunnel into an ancient world.” 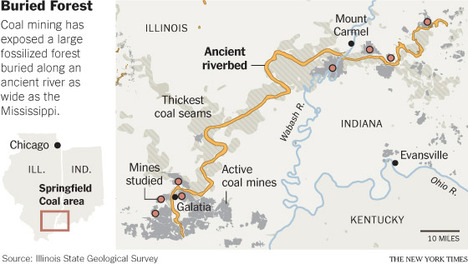 Source of map graphic: online version of the NYT article quoted and cited above.

(p. B3) . . . , Discovery Communications — which owns the Discovery Channel, Animal Planet, the Science Channel and others — announced in early April that it was shutting down Planet Green, a four-year-old channel that featured environmental programming. The channel floundered with low ratings and what executives said were a lack of entertaining eco-themed shows.

Visit msnbc.com for breaking news, world news, and news about the economy

The report by Kerry Sanders was broadcast on the NBC Nightly News on June 20, 2012.
The transcript below was posted by NBC. I corrected a few typos and omissions (e.g., the posted transcript omitted that much of the funding had come from private grants), but I have not checked the whole transcript.

>>> In Florida tonight the race is on to save a precious natural resource, coral reefs. we can sometimes forget they are living things. after being damaged by everything from rising ocean temperatures to storms and fishing nets, environmental experts are stepping in big time to help. our report from nbc’s kerry sanders.

>> reporter: a quarter mile off the coast of fort lauderdale, down 25 feet so the seabed, scientists have taken a tiny experiment that began more than six years ago and turned it into a massive accomplishment.
>> no one thought it was possible. we proved them wrong.
>> reporter: corals, impossible to ongrow artificially in the environment are now thriving. researchers say it’s a very simple idea, coral is grown in an underwater nursery, then it’s harvested. i joined the team snipping two-inch long cuttings, like pruning a rose. with a nail glued into the rhinestone they are held in place. zip ties hold the ties to the nail. in two weeks the coral has anchored itself growing in the very spots where it was disappearing. from the coast off south florida as far south as the virgin islands, the first 8,000 coral can you get are taking hold saving endangered elkhorn and stag horn coral.
>> after it was listed it helped our funding.
>> reporter: Funding came from private grants and even federal stimulus money to protect this natural resource, prized for supporting an abundant fish life and attracting tourism.
>> They protect our coastlines from storms, without these reefs breaking up wave energy, our erosion on the beach would be much more substantial.
>> reporter: Coral making a comeback one clipping at a time. Kerry Sanders, NBC News off the coast of Fort Lauderdale.

(p. 194) Sam Walton is my pick for America’s greatest entrepreneur of the twentieth century.
He not only built the world’s largest retailing empire and the single most valuable company in America, he created the institution with the greatest muscle to do good today.

The YouTube video embedded above was from a CBS Evening News broadcast in June 2012. It illustrates the difficulty of the government successfully selecting the technologies, and companies, that will eventually prove successful. (The doctrine that government can and should do such selection is often called “industrial policy.”)

The Obama administration has bet billions of tax dollars on lithium ion batteries for electric vehicles that A123 Systems won $249 million of. But as Sharyl Attkisson reports, expensive recalls and other setbacks have put substantial doubt in the company’s ability to continue.

The text above, and the embedded video clip were published on YouTube on Jun 17, 2012 by CBSNewsOnline at http://www.youtube.com/watch?v=k4Ugklc0rIo