(p. C7) In Mr. Stewart’s telling, the central tenets of “philosophical radicalism” worked their way into the Declaration of Independence and the Constitution by a kind of ideological stealth. When, for example, Jefferson referred in the first paragraph of the Declaration to “the separate and equal station to which the Laws of Nature and of Nature’s God entitle” a nation, he wasn’t just offering a palatable conception of deity to his religious or nominally religious readers. He was drawing on a radical tradition stretching back to John Locke and especially to the Dutch rationalist Baruch Spinoza, who himself had drawn on the ancient Greek philosophers Epicurus and Lucretius.

(p. A4) . . . , no Briton is ever entirely happy with the taxpayer-funded service, and now the case of a 5-year-old boy with a brain tumor has thrown a harsh light on the $170 billion-a-year system.
Critics are asking whether the service was justified in refusing a cancer treatment for the boy, Ashya King, sought by his desperate parents in an effort to save his life, and whether it overstepped in trying to impose its decision on his family.
The refusal set off a chain of events that enthralled and horrified the British public, as Ashya’s parents removed their son from University Hospital Southampton in England on Aug. 28 without the consent of British doctors, setting off a highly publicized international hunt. Concern for the child, however, turned into public outrage when the parents, Brett and Naghemeh King, were arrested and jailed in Madrid, where they had traveled to sell their holiday home so they could pay for the treatment, called proton beam therapy.
. . .
“They treated us like terrorists,” Mr. King, 51, said during an emotional news conference in Spain, where he and his wife were held for three days, separated from their critically ill son, as British authorities pursued University Hospital Southampton’s recommendation that Ashya be made a ward of the court.
. . .
(p. A10) Professor Hunter . . . said that, because the health service is publicly accountable, doctors tend to be reluctant to recommend innovative solutions for fear of lawsuits if things go wrong.
Mrs. Anderton, too, said that, despite the excellent care her son received, the N.H.S. is not always at the cutting edge. “The only downside is that we don’t have advanced types of treatments that could be lifesaving,” she said.

(p. A1) The Marxist Internet Archive, a website devoted to radical writers and thinkers, recently received an email: It must take down hundreds of works by Karl Marx and Friedrich Engels or face legal consequences.
The warning didn’t come from a multinational media conglomerate but from a small, leftist publisher, Lawrence & Wishart, which asserted copyright ownership over the 50-volume, English-language edition of Marx’s and Engels’s writings.
To some, it was “uncomradely” that fellow radicals would deploy the capitalist tool of intellectual property law to keep Marx’s and Engels’s writings off the Internet. And it wasn’t lost on the archive’s supporters that the deadline for complying with the order came on the eve of May 1, International Workers’ Day.
. . .
(p. A4) . . . the libertarian Cato Institute enjoyed teasing its ideological adversaries with an I-told-you-so blog post titled, “Because Property Rights Are Important.”
. . .
The publisher . . . tried to turn the tables on its critics, questioning whether it was indeed radical to believe that there is no ownership of content produced through hard work, like the mammoth translation and annotation of Marx’s and Engels’s work, a project initially directed by the Soviet Union in the late 1960s that took some 30 years of collaboration among scholars across the world.
In a note on its site, Lawrence & Wishart said its critics were not carrying on the socialist and communist traditions, but reflecting a “consumer culture which expects cultural content to be delivered free to consumers, leaving cultural workers such as publishers, editors and writers unpaid, while the large publishing and other media conglomerates and aggregators continue to enrich themselves through advertising and data-mining revenues.”

(p. 113) Marshall was a youthful maverick, not bound by traditional theory and not professionally invested in a widely held set of beliefs. There is such a thing as being too much of an insider. Marshall viewed the problem with fresh eyes and was not constrained by the requirement to obtain approval or funding for his pursuits. It is also noteworthy that his work was accomplished not at a high-powered academic ivory tower with teams of investigators but instead far from the prestigious research centers in the Western Hemisphere.
The delay in acceptance of Marshall’s revolutionary hypothesis reflects the tenacity with which long-held concepts are maintained. Vested interests–intellectual, financial, commercial, status–keep these entrenched. Dogmatic believers find themselves under siege by a new set of explanations.

(p. A11) The author remains generally optimistic about India’s prospects. Economic reforms that began in 1991 have quickened growth. On average, GDP has grown nearly 7% a year since then. Thanks to a media revolution that began in the 1990s and has exploded over the past decade, a state-owned monopoly over television news has given way to upward of 450 raucous channels that make Fox News look staid by comparison. The author argues that together these two trends have sparked a kind of virtuous cycle: Better-educated and better-fed Indians are demanding more from their politicians. A take-no-prisoners media will keep them on their toes.
. . .
Educated Indians can’t stop complaining about the politicians who lead them. Yet, echoing the historian Ramachandra Guha, Mr. Denyer argues that India’s main success since its independence in 1947 has been political rather than economic. It has strengthened its democratic institutions and nurtured religious and cultural pluralism. Despite the fact that the average Indian earned $1,500 last year, less than a fourth of the average Chinese, it is in New Delhi, not Beijing, that you can afford to call the president (or prime minister) a blithering idiot without worrying about a midnight knock on the door.

(p. A19) Scientists have long known that sea surface temperatures are lower when strong winds whip up ocean waves, and higher when the seas are calm. Researchers generally have assumed that the phenomenon was but one factor in that warming, and that increased levels of carbon dioxide from human activity play a major role in driving rising temperatures.
But the new analysis, which relies on wind, barometric pressure and temperature data recorded from 1900 to 2012, concludes that human activity has little impact.
“The concept of winds controlling or affecting ocean temperature in that very way is not controversial, but the strength of that relationship was quite amazing” in the northwestern Pacific, said James Johnstone, a climatologist and the study’s lead author. “It explains practically every wiggle in the ocean temperature variations. It’s a phenomenal correlation.”

The Johnstone paper, summarized above, is:
Johnstone, James A., and Nathan J. Mantua. “Atmospheric Controls on Northeast Pacific Temperature Variability and Change, 1900-2012.” Proceedings of the National Academy of Sciences. Published online before print, September 22, 2014, doi: 10.1073/pnas.1318371111. 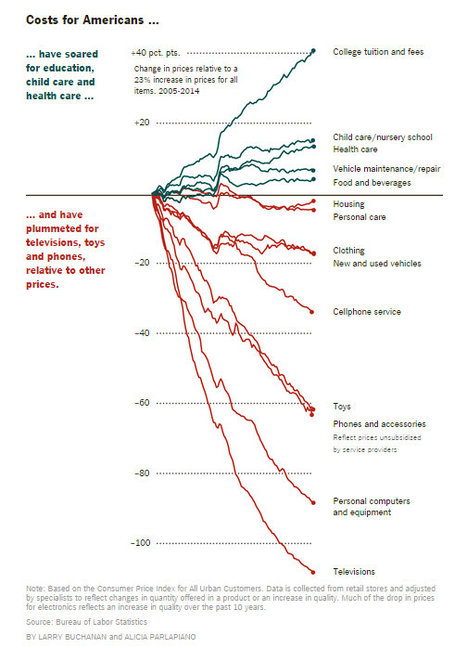 (p. A1) WASHINGTON — Is a family with a car in the driveway, a flat-screen television and a computer with an Internet connection poor?

Americans — even many of the poorest — enjoy a level of material abundance unthinkable just a generation or two ago.
. . .
(p. B2) Two broad trends account for much of the change in poor families’ consumption over the past generation: federal programs and falling prices.
Since the 1960s, both Republican and Democratic administrations have expanded programs like food stamps and the earned-income tax credit. In 1967, government programs reduced one major poverty rate by about 1 percentage point. In 2012, they reduced the rate by nearly 13 percentage points.
As a result, the differences in what poor and middle-class families consume on a day-to-day basis are much smaller than the differences in what they earn.
“There’s just a whole lot more assistance per low-income person than there ever has been,” said Robert Rector, a senior research fellow at the conservative Heritage Foundation. “That is propping up the living standards to a considerable degree,” he said, citing a number of statistics on housing, nutrition and other categories.
. . .
. . . another form of progress has led to what some economists call the “Walmart effect”: falling prices for a huge array of manufactured goods.
Since the 1980s, for instance, the real price of a midrange color television has plummeted about tenfold, and televisions today are crisper, bigger, lighter and often Internet-connected. Similarly, the effective price of clothing, bicycles, small appliances, processed foods — virtually anything produced in a factory — has followed a downward trajectory. The result is that Americans can buy much more stuff at bargain prices.

(p. 107) . . . Claude Bernard, the nineteenth-century founder of experimental medicine, . . . famously said, “If an idea presents itself to us, we must not reject it simply because it does not agree with the logical deductions of a reigning theory.”

(p. A11) Mr. Bryce’s engrossing survey has two purposes. The first is to refute pessimists who claim that technology-driven economic growth will burn through the planet’s resources and lead to catastrophe. “We are living in a world equipped with physical-science capabilities that stagger the imagination,” he writes. “If we want to bring more people out of poverty, we must embrace [technological innovation], not reject it.” The book’s other purpose is to persuade climate-change fundamentalists that they are standing on the wrong side of history. Instead of saving the planet by going backward to Don Quixote’s windmills, they need to take a progressive approach to technology itself, he says, striving to make nuclear power safer, for instance, and using the hydrocarbon revolution sparked by fracking and deep-offshore exploration to bridge the way to the future.
. . .
Mr. Bryce focuses in particular on the vacuum tube, designed in 1906 by Lee de Forest, the man also credited with inventing the radio.
The discovery of the vacuum tube, Mr. Bryce says, was a revolutionary event. By trapping the energy generated from the free flow of electrons and directing it to boost a small AC current into a much larger one, de Forest created electric amplification–which the transistor and integrated circuit would multiply exponentially.

(p. A13) . . . in addition to rubber-stamping the agreement that waived Tesla’s property, sales and business taxes for a decade or more–while throwing in discount power rates–the Nevada legislature also approved a bill last week that would exempt the auto maker from franchising regulations outlawing the company’s retail approach. The state’s auto dealers, who only weeks ago threatened to sue over the matter, shifted gears and endorsed the legislation.
“My car dealers want to assist in any way they can,” John Sande of the Nevada Franchise Auto Dealers Association told the Reno Gazette Journal. “Nevada law does not allow Tesla to come in and sell directly to the consumer, so we are going to have to come in and change it so they can sell directly to the consumer.”
No doubt the dealers balanced the pros and cons of agitating for their own self-interest against overwhelming political support for the deal and the spending potential of thousands of new, well-paid workers who may prefer a Ford or Chevy pickup over a $70,000 Tesla Model S. But the fact that Nevada legislators so quickly jettisoned a key provision of the state’s dealership-franchise provisions speaks volumes about how essential these statutes really are to the well-being of their constituents.
There is no rational reason Tesla–or any other automobile manufacturer–should be restricted from selling new cars directly to those who seek to buy them.