(p. A16) In dissent, Justice Elena Kagan wrote that the real issue in the case, Yates v. United States, No. 13-7451, was that the law is too harsh. It is, she wrote, “too broad and undifferentiated, with too-high maximum penalties, which give prosecutors too much leverage and sentencers too much discretion.”
She added, “And I’d go further: In those ways,” the law “is unfortunately not an outlier, but an emblem of a deeper pathology in the federal criminal code.”
Still, she said, “this court does not get to rewrite the law.” She said it was “broad but clear.”
“A fish is, of course, a discrete thing that possesses physical form,” Justice Kagan wrote, citing as authority the Dr. Seuss classic “One Fish Two Fish Red Fish Blue Fish.”
It does not matter, she said, that what Mr. Yates destroyed was not a document.
“A person who hides a murder victim’s body is no less culpable than one who burns the victim’s diary,” she wrote. “A fisherman, like John Yates, who dumps undersized fish to avoid a fine is no less blameworthy than one who shreds his vessel’s catch log for the same reason.”
Justices Antonin Scalia, Anthony M. Kennedy and Clarence Thomas joined Justice Kagan’s dissenting opinion.

(p. A25) “What I find destructive,” says David Autor of the Massachusetts Institute of Technology, “is the message that if you don’t get into the top 1 percent then you’re out of the game. That’s deeply, deeply incorrect.”
Autor’s own research shows that skills differences are four times more important than concentration of wealth in driving inequality. If we could magically confiscate and redistribute the above-average income gains that have gone to the top 1 percent since 1979, that would produce $7,000 more per household per year for the bottom 99 percent. But if we could close the gap so that high-school-educated people had the skills of college-educated people, that would increase household income by $28,000 per year. 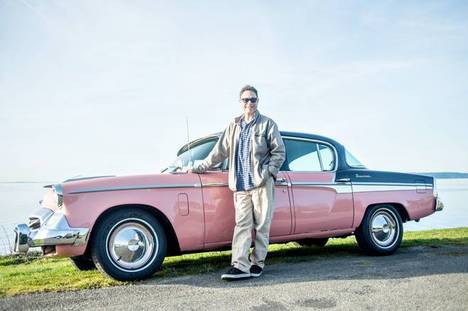 “Greg Lange, 53, with his two-tone 1955 Studebaker President, near his home in Edmonds, Wash.” Source of caption and photo: online version of the WSJ article quoted and cited below.

. . .
Studebaker wasn’t a big Detroit corporation. It was a smaller company out of South Bend, Ind., and had to be highly imaginative to compete with Ford and General Motors. This resulted in unique designs and powerful engines. The one in my President is called a Passmaster (a 259 cubic inch V8); the meaning is obvious.

(p. 491) Like de Gaulle, Telling talked of decentralization as he centralized all things beneath him. He pulled the authority of individual stores into the purview of the retail groups, then the power of the groups into the territory, and then the awesome power of the territories up into the Tower–with an assist to Ed Brennan at the end. The killing off of layers of management in many large companies causes the authority to fall down as if by gravity, but Telling pulled it back up manually. Every retirement caused former authority to come up to him.

(p. C6) “Visions of Science” is, as Mr. Secord acknowledges, “a book about books.” We learn more about typeface size, bindery material, print runs and sales figures of the books than about the authors. We would not glean from this account, for example, how intertwined their lives were: They attended the same parties, discussed science together and reviewed one another’s works. Taken together, the books Mr. Secord features tell a fascinating story, and they paved the way to another that is not featured in Mr. Secord’s account but hovers over the others like Davy’s spirit guide.
In “Origin of Species” (1859), Charles Darwin took the central ideas in these books–that there is a connection between the sciences, that the Earth is much older than previously thought, that God created the world to work by uniform natural law, and that He built lawful change into his original creation–and used them to frame his theory of evolution by natural selection in terms his readers could accept. The success of Darwin–and the books that influenced him–is evidenced by the fact that within two decades of its publication most British scientists and much of the public accepted that species evolved.

The book under review is:
Secord, James A. Visions of Science: Books and Readers at the Dawn of the Victorian Age. Chicago: University of Chicago Press, 2015.

(p. A23) Surveys and interviews give us some sense of what’s going on. Voters have a lot of economic anxieties. But they also have a template in their heads for what economic dynamism looks like.
That template does not include a big role for government. Polls show that faith in government is near all-time lows. In a Gallup survey, voters listed dysfunctional government as the nation’s No. 1 problem. In fact, American voters’ traditional distrust has morphed and hardened. They used to think it was bloated and ineffective. Now they think it is bloated and ineffective and rigged to help those who need it least.
When many of these voters think of economic dynamism, they think of places like Texas, the top job producer in the nation over the past decade, and, especially, places like Houston, a low-regulation, low-cost-of-living place. In places like Wisconsin, voters in the middle class private sector support candidates who cut state pensions and pass right-to-work laws, so that economic governance can be more Texas-style.

(p. D1) Some of the top researchers on aging in the country are trying to get an unusual clinical trial up and running.
. . .
The trial aims to test the drug metformin, a common medication often used to treat Type 2 diabetes, and see if it can delay or prevent other chronic diseases. (The project is being called Targeting/Taming Aging With Metformin, or TAME.) Metformin isn’t necessarily more promising than other drugs that have shown signs of extending life and reducing age-related chronic diseases. But metformin has been widely and safely used for more than 60 years, has very few side effects and is inexpensive.
The scientists say that if TAME is a well-designed, large-scale study, the Food and Drug Administration might be persuaded to consider aging as an indication, or preventable condition, a move that could spur drug makers to target factors that contribute to aging.
. . .
(p. D4) Fighting each major disease of old age separately isn’t winnable, said S. Jay Olshansky, another TAME project planner and a professor at the school of public health at the University of Illinois at Chicago. “We lower the risk of heart disease, somebody lives long enough to get cancer. If we reduce the risk of cancer, somebody lives long enough to get Alzheimer’s disease.”
“We are suggesting that the time has arrived to attack them all by going after the biological process of aging,” Dr. Olshansky said.
Sandy Walsh, an FDA spokeswoman, said the agency’s perspective has long been that “aging” isn’t a disease. “We clearly have approved drugs that treat consequences of aging,” she said. Although the FDA currently is inclined to treat diseases prevalent in older people as separate medical conditions, “if someone in the drug-development industry found something that treated all of these, we might revisit our thinking.”

(p. 46) It was never that layoffs were anathema to Telling as such; he just resented the sloppiness of a 10-percent across-the-board layoff when some areas of the company should have been cut by 40 percent and some built up by half.

(p. B1) About 340 pages into Henry M. Paulson’s new book on China, a sentence comes almost out of nowhere that stops readers in their tracks.
“Frankly, it’s not a question of if, but when, China’s financial system,” he writes, “will face a reckoning and have to contend with a wave of credit losses and debt restructurings.”
. . .
(p. B2) Like the United States crisis in 2008, Mr. Paulson worries that in China “the trigger would be a collapse in the real estate market,” and he declared in an interview that China is experiencing a real estate bubble. He noted that debt as a percentage of gross domestic product in China rose to 204 percent in June 2014 from 130 percent in 2008.
“Slowing economic growth and rapidly rising debt levels are rarely a happy combination, and China’s borrowing spree seems certain to lead to trouble,” he wrote.
Mr. Paulson’s analysis in his book, “Dealing With China: An Insider Unmasks the New Economic Superpower,” is all the more remarkable because he has long been a bull on China and has deep friendships with its senior leaders, who could frown upon his straightforward comments.

(p. B7) Research suggests that happiness over the course of our lives is U-shaped, with our satisfaction deteriorating through our 20s and 30s, hitting bottom in our 40s and then bouncing back from there.
What causes the decline in our happiness during our early adult years? We don’t know for sure. It might be the stress of juggling work and home life, or it could be the gradual realization that we won’t fulfill all of our youthful ambitions.
But for some, midlife dissatisfaction may reflect growing disenchantment with their chosen career. The good news: Today, thanks to our longer life expectancy, we have time for a second act.
In fact, that second act may be necessary if we are laid off. Our new career could prove more fulfilling, but it might come with a smaller paycheck.
This is a reason to start saving as soon as we enter the workforce. If we do that, we likely will have the financial flexibility to swap into a less lucrative job. What if we haven’t been good savers? We may be stuck in a job we have come to hate.

For the full commentary, see:
JONATHAN CLEMENTS. “Can You Afford a Long Life?” The Wall Street Journal (Sat., APRIL 25, 2015): B7.
(Note: the online version of the commentary has the date APRIL 23, 2015, and has the title “What Long Life Spans Mean for Your Money and Career.”)