(p. C6) At the close of his presidency in 1999, Nelson Mandela praised Mohandas Gandhi for believing that the “destiny” of Indians in South Africa was “inseparable from that of the oppressed African majority.” In other words, Gandhi had fought for the freedom of Africans, setting the pattern for his later effort to liberate India from British rule.
Nothing could be more misleading. Gandhi’s concern for the African majority — “the Kaffirs,” in his phrase — was negligible. During his South African years (1893-1914), argue Ashwin Desai and Goolam Vahed in “The South African Gandhi,” he was far from an “anti-racist, anti-colonial fighter on African soil.” He had found his way to South Africa mainly by the accident of being offered a better job there than he could find in Bombay. He regarded himself as a British subject. He aimed at limited integration of Indians into white society. Their new status would secure Indian rights but would also acknowledge white supremacy. In essence, he wanted to stabilize the Indian community within the stratified system that later became known as apartheid.
. . .
“The South African Gandhi” deals comprehensively with Gandhi’s decisive two decades in South Africa. It complements Perry Anderson’s “The Indian Ideology” (2013), which explains how Gandhi later treated the Dalits, or Untouchables, much as he had dealt with black Africans.
For my taste, the book’s tone is too academic, but the authors use sound evidence and argue their case relentlessly–Gandhi’s vision did not include the majority of the people in South Africa, the Africans themselves.

Those who support the policies that have brought us economic stagnation, endorse Robert J. Gordon who believes that doom and gloom are inevitable. With Gordon to rely on, they do not have to face responsibility for the effects of their policies, or go through the cognitive stress of changing their views.
Contra Gordon, if we adopt policies friendly to innovative entrepreneurship, opportunity and growth will return.

(p. B1) The idea that America’s best days are behind us sits in sharp tension with the high-tech optimism radiating from the offices of the technology start-ups and venture capital firms of Silicon Valley. But it lies at the heart of the current political unrest. And it is about to elbow its way forcefully into the national conversation.

Robert J. Gordon, a professor of economics at Northwestern University who has patiently developed the proposition in a series of research papers over the (p. B9) last few years, has bundled his arguments into an ambitious new book, “The Rise and Fall of American Growth” (Princeton University Press).
The hefty tome, minutely detailed yet dauntingly broad in scope, offers a lively portrayal of the evolution of American living standards since the Civil War. It also adds up to a dispiriting forecast for American prosperity in the decades to come. “This book,” he writes in the introduction, “ends by doubting that the standard of living of today’s youths will double that of their parents, unlike the standard of living of each previous generation of Americans back to the late 19th century.”
. . .
Skepticism is warranted, to be sure. Since the time of Thomas Malthus, eras of depressed expectations like our own have inspired predictions of doom and gloom that were proved wrong once economies turned up a few years down the road.
“For reasons I have never understood, people like to hear that the world is going to hell,” the economic historian Deirdre N. McCloskey of the University of Illinois, Chicago, wrote in an essay about “Capital in the Twenty-First Century,” the blockbuster about income inequality by the French economist Thomas Piketty. “Yet pessimism has consistently been a poor guide to the modern economic world.”
Optimism, though, is also subject to cognitive biases. It’s not just that the income of our optimistic techno-entrepreneurs is growing faster than gross domestic product. A lot of new innovation — the rockets to vacations in orbit, the Apple Watch and Google Glass — also seems custom-designed for them.
“If you are sitting in Silicon Valley, rich and at the frontier of technology,” said Lawrence F. Katz of Harvard, “it is probably true that things are getting better.”
The same can’t always be said for the rest of us.

The Gordon book discussed in the commentary, is:
Gordon, Robert J. The Rise and Fall of American Growth: The U.S. Standard of Living since the Civil War, The Princeton Economic History of the Western World. Princeton, NJ: Princeton University Press, 2016.

artdiamondblog is 10 years old today. I mainly aim to highlight important evidence, examples, and ideas. I am working to pull some of these together into a book about how the world can be improved by allowing entrepreneurs to innovate. I appreciate my loyal readers, most loyally my former student Aaron Brown.

(p. 20) The biggest problem with Malthusiasm, as Mayhew addresses at length, is that Malthus was wrong. He thought England was nearing the limits of its ability to provide for its growing population. But as that population continued to grow in the 19th century, the country proved more than able to feed itself by increasing agricultural productivity and importing food that it could easily pay for with its industrial wealth. And toward the end of the century, birthrates began falling and population growth slowed.
. . .
There is evidence enough in this book for a pretty withering attack on Malthusianism, if not on Malthus. Mayhew, however, prefers the role of calm and evenhanded guide. At the end he’s even hinting that today’s Malthusian prophets of environmental doom are on to something. They may be: Just because Malthus was wrong about nature’s limits in 1798 doesn’t prove we won’t ever hit those limits. Past performance is no guarantee of future results. Still, you’d think it would put more of a damper on people’s Malthusiasm.

The book being reviewed is:
Mayhew, Robert J. Malthus: The Life and Legacies of an Untimely Prophet. Cambridge, MA: Belknap Press, 2014.

During my sabbatical for the 2014-2015 school year, and including this summer and next summer, I plan to throw myself into completion of my book Openness to Creative Destruction. To make more time for that overarching project, I intend to streamline my blogging. I still plan to have an entry posted every day, but will no longer routinely post photos and images, saving the time spent finding, formatting and filing photos and images.
The main goal of my blog is to make evidence and examples widely available, that are related to my core interests of innovation and entrepreneurship. Fewer photos and images may make the blog less visually appealing, but should not interfere with this main goal.
I also plan to increase the percentage of entries that are directly or indirectly relevant to my current and future book projects,
I hope my blog will continue to be of use to the “remnant” of those who share my core interests. 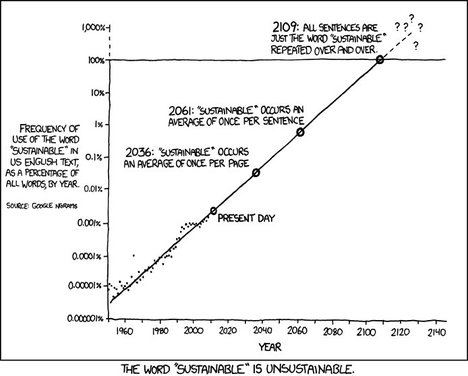 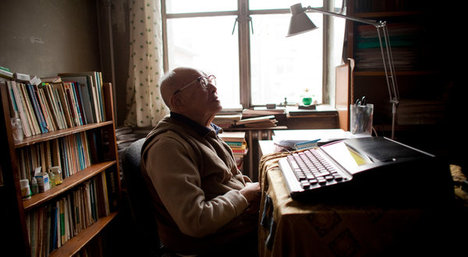 “”You can have democracy no matter what level of development. Just look at the Arab Spring.”- Zhou Youguang” Source of caption and photo: online version of the NYT article quoted and cited below.

(p. A5) BEIJING. EVEN at 106 years old, Zhou Youguang is the kind of creative thinker that Chinese leaders regularly command the government to cultivate in their bid to raise their nation from the world’s factory floor.
So it is curious that he embodies a contradiction at the heart of their premise: the notion that free thinkers are to be venerated unless and until they challenge the legitimacy of the ruling Communist Party.
Mr. Zhou is the inventor of Pinyin, the Romanized spelling system that linked China’s ancient written language to the modern age and helped China all but stamp out illiteracy. He was one of the leaders of the Chinese translation of the Encyclopaedia Britannica in the 1980s. He has written about 40 books, the most recent published last year.
. . .
His blog entries range from the modernization of Confucianism to Silk Road history and China’s new middle class. Computer screens hurt his eyes, but he devours foreign newspapers and magazines. A well-known Chinese artist nicknamed him “Trendy Old Guy.”
. . .
THE decade-long Cultural Revolution that began in 1966 wiped out Mr. Zhou’s lingering belief in communism. He was publicly humiliated and sent to toil for two years in the wilderness.
. . .
About Mao, he said in an interview: “I deny he did any good.” About the 1989 Tiananmen Square massacre: “I am sure one day justice will be done.” About popular support for the Communist Party: “The people have no freedom to express themselves, so we cannot know.”
As for fostering creativity in the Communist system, Mr. Zhou had this to say, in a 2010 book of essays: “Inventions are flowers that grow out of the soil of freedom. Innovation and invention don’t grow out of the government’s orders.”
No sooner had the first batch of copies been printed than the book was banned in China.

The haiku above was my entry in response to the haiku challenge in the Kauffman Foundation’s First Quarter 2012 survey “of top economics bloggers.” The haiku challenge was: “The euro is troubled, so what is its fate in 2012 and/or what should policymakers do?”

The results of the Q1 2012 survey can be found at: http://www.kauffman.org/uploadedFiles/econ_bloggers_outlook_q1_2012.pdf

Yesterday (10/31/11) the Kauffman Foundation issued a press release reporting the results of their fourth-quarter survey of “top economics bloggers.” The URL for the press release is:
http://www.kauffman.org/newsroom/only-half-of-economics-bloggers-expect-employment-growth-in-the-next-three-years.aspx

The last few lines of the press release are summarized below:
In their fourth-quarter survey of “top economics bloggers” the Kauffman Foundation asked the panel of bloggers “to describe the U.S. economy in haiku. Nearly 20 haiku were submitted and subsequently voted on by more than 500 public readers. The most popular was by Professor Art Diamond (http://artdiamondblog.com):”

My Jobs haiku has received some discussion in the blogosphere.

It is reproduced, along with haikus submitted by other economics bloggers, in an entry of the blog of the Economist magazine:
http://www.economist.com/blogs/freeexchange/2011/10/poetry?fsrc=scn/tw/te/bl/theeconomyinhaiku

What a creative way to describe the economy. It is so interesting to see how everyone interprets the economy through poem. I personally like the “jobs and Jobs” one. I think it describes our economy, and gives a snapshot of a major moment in our history.

It is interesting to see people’s opinions about the economy being put into haikus. My favorite out of these is the haiku that refers to the fact that we have lost Steve Jobs and many jobs for US citizens. And in order to regain these jobs we are going to need more people to contribute in ways Steve Jobs has.

CNBC correspondent Jane Wells describes my haiku as “poetic” on her blog:
http://www.cnbc.com/id/45078738