Thomas Friedman’s claim here is plausible, but I find it surprising, given his strong push for a worker safety net when the worker loses a job to creative destruction. The safety net Friedman proposes, in this book anyway, is one that does incorporate some incentives to find a job, but sounds like it could be ‘gamed’ to delay the tough decisions that might need to be made. Hayek had some useful observations on this issue way back in his Road to Serfdom.

Apparently a perq of being a columnist for the New York Times, is that you get access to pretty high quality economics tutors. Tom Friedman tells us:

My economics tutor Paul Romer is fond of saying, “Everyone wants economic growth, but nobody wants change.” Unfortunately, you cannot have one without the other, especially when the playing field shifts as dramatically as it has since the year 2000. (p. 339)

Comparisons between monopoly and competition, . . ., must be made gingerly. One is liable to fall into nonsense of the sort “If my grandmother had wheels she would be a tram.” (p. 366)

McCloskey, Donald N. The Applied Theory of Price. 2nd ed. New York: Macmillan Publishing Company, 1985.
The usual assumption in price theory texts is that the cost structure would be the same for an industry whether it was competitive or monopolized. The graph above, from McCloskey, is the only one I am aware of that tries to represent the realistic possibility that costs may be significantly lower in monopoly. Usually we think of new goods resulting from creative destruction, but Schumpeter also emphasized new processes, and the new processes presumably would often reduce costs. 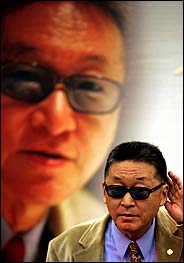 BEIJING, Sept. 22 – China’s leaders may have felt they had no better friend in Taiwan than Li Ao, a defiant and outspoken politician and author who says that Taiwan should unify with Communist China.
But when China invited Mr. Li to tour the mainland this week, the Communist Party got a taste of its rival’s pungent democracy.
During an address at Beijing University on Wednesday evening, broadcast live on a cable television network, Mr. Li chided China’s leaders for suppressing free speech, ridiculed the university administration’s fear of academic debate and advised students how to fight for freedom against official repression.
“All over the world leaders have machine guns and tanks,” Mr. Li told the students and professors in the packed auditorium. “So I’m telling you that in the pursuit of freedom, you have to be smart. You have to use your cunning.”
. . .
Though Mr. Li did not criticize President Hu directly, he made pointed references to the lack of freedoms in China and suggested that the “poker-faced” bureaucrats of the Communist Party did not have enough faith in their legitimacy to allow normal intellectual discussion.
With several top university officials sitting by his side, he called the administrators “cowardly” for ferreting out professors at the school who were suspected of opposing Communism.

“I remember George Shultz,” whom he once worked for, “was once asked how he would compare management in the private sector, public sector, and academics,” Mr. Wolfowitz says. “In the private sector you better be careful what you ask for because people are going to go out and do it. . . . The government, you don’t have to worry about that. You tell people (to) do something and you check back two months later and nothing’s happened. But in the academic world, you tell people to do something and they look at you strangely and they say, ‘Who the heck do you think you are giving us orders?'” (p. A10; “to” added; “. . . ” in original)

His favorite new source book is the World Bank’s “Doing Business” report, an annual guide to the obstacles that countries impose on their own entrepreneurs. The 2006 version is just out, and for the first time Mr. Wolfowitz had it rank countries, from 1 to 155, on the “ease of doing business.” New Zealand ranked first, and the U.S. third (after Singapore), but African nations held down 25 of the last 30 places.
Take Burkina Faso, a landlocked West African country that came in at . . . 154. “If you were in a food supply business,” Mr. Wolfowitz says, “registering a business would require minimum capital equal to nearly five times annual income. Fees alone cost 1½ times income per capita . . . to register your land, you have to pay fees, 16% of the value of the land. So the result is in a country of 12 million people, only 50,000 are in the formal” economy.
So why is he optimistic? Burkina has grown for the last decade, he says, and the country has political cohesion. “I had a great meeting with the president of Burkina” on a recent trip, and “I shouldn’t say this, but I want to find a way to communicate these results to him and say, do something about it, your country will grow even more.”

PAUL A. GIGOT. “Dr. Wolfowitz, I Presume.” Wall Street Journal (September 24, 2005): A10.
The “Doing Business” report is in its second or third annual version, and is described enthusiastically in Thomas Friedman’s new book The World is Flat. John Devereux suggested to me that one interpretation of the criteria used for the ranking, is that they are a step in the direction of measuring openness to creative destruction. 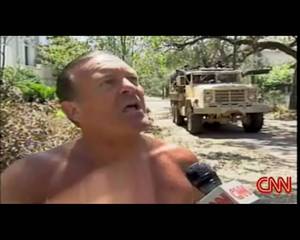 Source: Screen capture from CNN “Refusing to Leave” report by Dan Simon on the morning of 9-9-05.

“This is America. Has your neighborhood ever been invaded by state troopers from another state?” “I will leave when I am dead.” Ashton O’Dwyer can’t understand why he is being forced to leave his dry, intact home in New Orleans. He asks the city: “Treat me with benign neglect.” The 9-9-05 report was followed up by Drew Griffin on 9-10-05 with the “Staying Put” report that presented businesses, and Afro-Americans, expressing sentiments similar to O’Dwyer’s.
Dr. Michael Baden on the “On the Record” Fox News show, hosted by Greta Van Susteren at about 9:47 PM central time on 9-9-05, stated that there was little danger from the “toxic” water unless people drink it. (Toxic water is the main reason given for the current, post-hurricane, forced evacuations.) Baden claims if the city wants to help people, they would be much more effective if they sprayed the water against mosquitoes.
(Dr. Michael Baden is the Chief Forensic Pathologist of the New York State Police, and was formerly the Chief Medical Examiner of New York City.)

<615> . . ., most reserachers conclude that the rates of return to R&D are comparable magnitudes in different countries. This is confirmed by our <616> meta-analysis. However, the elasticities are significantly lower in Europe and Japan, as compared with the USA. (pp. 615-616)

Source:  Wieser, Robert. "Research and Development Productivity and Spillovers: Empirical Evidence at the Firm Level." Journal of Economic Surveys 19, no. 4 (2005): 587-621.

<284> As Harvard University economist Robert Lawrence notes, the greatest single asset <285> that the American economy has always had is the flexibility and mobility of its labor force and labor laws. That asset will become even more of an advantage in the flat world, as job creation and destruction both get speeded up. (pp. 284-285)

We are entering an era of creative destruction on steroids. (p. 280)