(p. B15) Mr. Pomerance was a somewhat out-of-the-mainstream playwright living in London in 1977 when Foco Novo, a theater company he had founded with Roland Rees and David Aukin, began thinking about staging “The Elephant Man,” based on the true story of Joseph Merrick, a man with severe physical deformities who became a celebrity in Victorian England in the 1880s.
. . .
The resulting play invited theatergoers to contemplate, among many other themes, what is normal and what isn’t.
. . .
Mr. Pomerance was not a talkative sort. “The final impression he gives,” a Times reporter wrote in 1979, “is of a man of considerable intellectual integrity who is not prepared to compromise, in ill-considered conversation, the greater truths he seeks to express on stage.”

(p. B1) Some playgoers don’t care for theatrical inside baseball, but if, like me, you love to peer through a peephole at the craziness of show folk, you’ll find “Light Up the Sky” hard to resist.
. . .
I especially like this sideswipe at drama critics: “What do I need with the theater–a cockamamie business where you get one roll of the dice from seven middle-aged men on the aisle who hated Mickey Mouse when they were kids.”

(p. A11) . . . , Professor Higgins notes that it is Eliza’s “curbstone English that will keep her in the gutter to the end of her days.” He boasts that with a few months under his instruction, she could get a job “as a lady’s maid or a shop’s assistant.”
The next morning, Eliza appears at Professor Higgins’s doorstep to hire him to teach her English because she wants to be “a lady in a flow’r shop, ‘stead of sellin’ at the corner of Tottenham Court Road.” He accepts.
Note the assumptions. Eliza didn’t place her hope in new regulations for street-side flower mongering. For Eliza, upward mobility was about acquiring the skills she needed to get ahead, in this case proper English and the manners that went with it.
. . .
In the end, the only real leverage a worker has over a boss is her ability to tell him where to get off–secure in the knowledge that she has other opportunities. Which is exactly what Eliza Doolittle does at the end, when she’s acquired the English and manners that mean she no longer has to put up with the bullying of Professor Henry Higgins.

For the full commentary, see:
WILLIAM MCGURN. “MAIN STREET; Audrey Hepburn Teaches Economics; Progressives rushing to help New York nail-salon workers should rent a copy of ‘My Fair Lady’.” The Wall Street Journal (Tues., May 26, 2015): A11.
(Note: ellipses added.)
(Note: the online version of the commentary has the date May 25, 2015.)

(p. D11) . . . American theater is a monoculture, a thick-walled bubble in which you’ll look long and hard to find anyone with an opinion about anything that is anywhere other than well to the left of center. 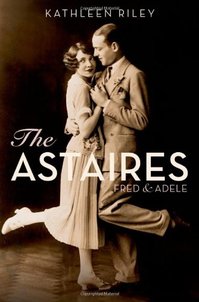 (p. C6) The Astaire universe was made of crazy joy, that guiltless worldview unique to the art of the American 1920s. The Astaires’ trademarked exit was the gleefully mischievous “runaround,” in which they trotted about the stage in ever increasing circles as if joined at the hip, expanding their geometry till they reached the wings and vanished. It was goofy and expert at once, a way of defining musical comedy as the state of being young, cute and in love with life.
. . .
“For all their jazz-fueled modernity,” Ms. Riley writes of the Astaires’ London réclame, they were “anti-modernist.” This pair was more than sunshine. The sheer zest with which they frisked through a show ran “counter to High Modernism’s pervasive sense of the instability of the self and the universe.” This was the time, Ms. Riley notes, of “The Waste Land,” “Ulysses,” “Vile Bodies.” Art was in despair. But the Astaires’ “defiant New World optimism” proved a remedy: meeting cute, assuming disguises and high-hatting the blues with fascinating rhythm. It’s a very American notion: that a strong foundation in popular art creates a positive worldview in general. Call it the audacity of charm.
. . .
They don’t make shows that way anymore, and Ms. Riley’s book is thus a resuscitation of a naive but perhaps more authentically native showbiz, an art of natural forces. “The Astaires” is a salute to an America at ease with itself and doing something wonderful in the song-and-dance line that seemed, for a time, like the hottest thing in the culture.

Three Russians are in the gulag. The first one says, “What are you in for?”
The second one replies, “I called Zbarsky a revolutionary.”
“That’s funny,” the first one says. “I called Zbarsky a counterrevolutionary.”
“That’s funny,” the third one says. “I’m Zbarsky.”
Vern Thiessen’s new play, “Lenin’s Embalmers,” which starts on Wednesday at the Ensemble Studio Theater in Clinton, opens with the ghost of Lenin telling this joke as a parable of the mordant doom pervading the Communist state he created.
In real life the joke wasn’t specifically about Zbarsky. You could insert any of Stalin’s thousands of lackeys turned victims. Certainly Zbarsky would do. Boris Zbarsky was a real person, one of the two biochemists who, after Lenin died in 1924, were ordered by the Kremlin to devise a way of preserving his body forever.
He and his colleague, Vladimir Vorobiev — the play’s main characters — succeeded spectacularly, won fortune and power, then fell from grace into the terror, like many others who served a regime that survived through myth and fear.
. . .
The new work, written as a stylized dark comedy, takes only a few liberties with history. It has Zbarsky and Vorobiev arrested after they’re tricked into betraying each other. In fact Mr. Vorobiev died in a hospital, under mysterious circumstances, in 1937. Mr. Zbarsky was arrested in 1952; he was freed two years later, after Stalin’s death, and died of a seizure soon after. Still, betrayals and trumped-up confessions were common in the era.

(p. W1) The 2000 film “Billy Elliot” was a surprise hit. It’s an absorbing drama about personal transformation and the power of art to ennoble the human spirit. “Billy Elliot: The Musical” — the noise is supplied by Sir Elton John — is a depressing spectacle about partisan politics and the ephemeral power of schlock.
. . .
The musical, a campy, anticapitalist confection, is just one of the latest prepackaged exercises in “transgression.” Maybe it’s “Corpus Christi,” Terrence McNally’s play about a gay Jesus Christ. Maybe it’s “The Goat,” Edward Albee’s play celebrating bestiality, or a production (p. W4) of “The Flying Dutchman” in which the heroine sports posters of Che Guevara and Martin Luther King on her bedroom wall. The point about these unpleasant offerings is not how outrageous but how common they are.
. . .
In the film, there was one extended reference to Margaret Thatcher. Mrs. Wilkinson’s middle-class drink-sodden husband (tellingly made “redundant” — that is, laid off) praises the prime minister for showing down the miners. He is hardly a sympathetic figure, but he had a point: If it costs more money to get the coal out of the ground then you make from selling it, why keep the pit open?
If there were truth in advertising, the musical would have been called “Billy Elliot, The Musical, Featuring Margaret Thatcher as the Incarnation of Evil.” She is roundly abused by several characters in the opening scenes, is the object of casual calumny throughout the show, and features in a Christmas children’s song — replete with gigantic scary Thatcher masks and puppets — whose refrain is “Merry Christmas, Maggie Thatcher. We all celebrate today because it’s one day closer to your death.” Nice stuff, eh?
In one sense, “Billy Elliot: The Musical” represents a growth enterprise. Everywhere you turn these days, you are met not only with celebrations of the vulgar but also entertainments that pretend to be brave, challenging “interrogations” of established taste which in fact are simply reflections of established taste. The little sermons about Thatcher and capitalism and bigotry are presented as if they were fresh thoughts designed to disturb the dogmatic slumbers of the audience. In fact, they simply reinforce the left-liberal clichés audiences everywhere internalized decades ago. It’s an odd phenomenon. In theaters and museums across the Western world you find audiences applauding sentiments that, were they translated into the real world, would spell their demise.
Perhaps it’s an instance of what Lenin was talking about when he said that the bourgeoisie was so rotten that it would sell the rope with which it was to be hanged. The matinee I attended was packed to the last emergency exit with a cheery crowd of nice, middle-class folks who cheered and clapped and whistled and bravoed.
. . .
The impressive thing about “Billy Elliot” the film is its dramatic enactment of serious questions. “Billy Elliot: The Musical” spoofs and sentimentalizes those questions, replacing them with a series of political sermons and distracting gymnastic exhibitions. In 1964, Susan Sontag famously said that the “ultimate Camp statement” was “It’s good because it’s awful.” Sontag wrote as an enthusiast for Camp. I have no doubt that she would have emerged happy from “Billy Elliot: The Musical.” “The whole point of Camp,” she wrote, “is to dethrone the serious.”

(p. 5go!) “In 1985, I took a train to London from Royal Air Force Mildenhall (Base) with a couple of med techs and decided to check out some of the plays,” Brodston recalled in his e-mail.
His theater date was a native Briton who had joined the U.S. Air Force.
“We came upon a play that had Charlton Heston in it, ‘The Caine Mutiny Court Martial,'” Brodston remembered. “We couldn’t afford the tickets, so they put us on the ‘king’s cuff’ (standby tickets for students and servicemen).”
Just as the house lights were dimming, an older woman led Brodston and his companion up the steps to a private box because no one had claimed the seats.
“Be quiet and don’t tell anyone,” she furtively whispered because she wasn’t supposed to give away box seats that normally fetch up to $300 each.
Two minutes into the play, the door at the rear of the box opened, and two people sat behind them. Engrossed in the play, Brodston and friend paid little attention.
“At intermission, we looked up and saw Lord Laurence Olivier and his wife, Joan Plowright, sitting behind us!”
. . .
In 1999, Brodston crossed paths with Plowright in New York, and she remembered the night they shared a box at the London theater.
“Larry used to get mad when people made fun of Chuck’s acting,” Plowright told Brodston. “He loved Chuck in ‘Ben Hur’ and that silly ape movie (‘Planet of the Apes’). He and the children would watch those movies again and again.”