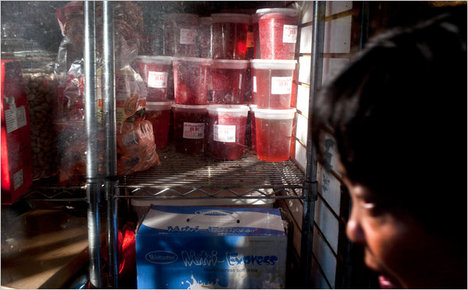 “Illegal rice wine for sale in Chinatown. The wine is popular among immigrants from Fujian Province.” Source of caption and photo: online version of the NYT article quoted and cited below.

(p. A22) The restaurant looks like so many others in the roiling heart of Chinatown, in Lower Manhattan: a garish sign in Chinese and English, slapdash photos of featured dishes taped to the windows, and extended Chinese families crowding around tables, digging into communal plates of steamed fish, fried tofu and sautéed watercress.

But ask a waitress the right question and she will disappear into the back, returning with shot glasses and something not on the menu: a suspiciously unmarked plastic container containing a reddish liquid.
It is homemade rice wine — “Chinatown’s best,” the restaurant owner asserts. It is also illegal.
In the city’s Chinese enclaves, there is a booming black market for homemade rice wine, representing one of the more curious outbreaks of bootlegging in the city since Prohibition. The growth reflects a stark change in the longstanding pattern of immigration from China.
In recent years, as immigration from the coastal province of Fujian has surged, the Fujianese population has come to dominate the Chinatowns of Lower Manhattan and Sunset Park, Brooklyn, and has increased rapidly in other Chinese enclaves like the one in Flushing, Queens.
These newcomers have brought with them a robust tradition of making — and hawking — homemade rice wine. In these Fujianese neighborhoods, right under the noses of the authorities, restaurateurs brew rice wine in their kitchens and sell it proudly to customers. Vendors openly sell it on street corners, and quart-size containers of it are stacked in plain view in grocery store refrigerators, alongside other delicacies like jellyfish and duck eggs.
The sale of homemade rice wine — which is typically between 10 and 18 percent alcohol, about the same as wine from grapes — violates a host of local, state and federal laws that govern the commercial production and sale of alcohol, but the authorities have apparently not cracked down on it.

In the passage quoted below, Bill Bryson is strongly critical of Thomas Edison. It’s been many years since I last read a full biography of Edison, but my impression is that Bryson is not being fair to Edison.
I like Bryson and I like Edison, so I was bothered enough to dig out the online “Notes” that Bryson posted to go with his book. On the passage critical of Edison, he cites p. 83 of Linda Simon’s Dark Light book.
It turns out that Simon is a literature professor whose book is mainly about the early fears that superstitious people had about electricity. Many of her sources are literary. The book is a long way from a focused, balanced biography of Edison.
On page 83, she makes a casual and unjustifiedly snide comment on Morgan, Vanderbilt, and especially Gould, and then criticizes Edison by associating him with them. She also criticizes Edison because others sometimes challenged his patents. (Just because lawsuits were brought against Edison, does not imply his patent claims were unsound—anyone can file a lawsuit who is willing to hire a lawyer.)
The “bribe” is apparently that Edison gave some reporters stock, or “suppers or songfests” who had reported favorably. To judge such claims, we would like more evidence and more context. (Today, many institutions hire former reporters to do public relations work. Universities often provide free meals to those whose favor they seek; even book publishers send out free books in the hope that they will be reviewed favorably. Do we count all of these as “bribes”? Are all “rewards” ipso facto “bribes”?)
My view is that if we are going to strongly malign the character of one who brought us so much good (Edison), we should do so based on stronger evidence than the brief casual opinions of Linda Simon.
On my “to do” list is to read a biography or two on Edison. When I do so, I will comment again on this issue.

(p. 130) By 1877, when he started his quest to make a commercially successful light, Edison was already well on his way to becoming known as ‘the Wizard of Menlo Park’. Edison was not a wholly attractive human being. He didn’t scruple to cheat or lie, and was prepared to steal patents or bribe journalists for favourable coverage. In the words of one of his contemporaries, he had ‘a vacuum where his conscience ought to be’. But he was enterprising and hard-working and a peerless organizer.

Michael Perelman has strongly suggested that I read David Well’s book. It is on my “to do” list.

(p. C10) The dull title of “Recent Economic Changes” does no justice to David A. Wells’s fascinating contemporary account of a deflationary miasma that settled over the world’s advanced economies in the 1880s. His cheery conclusion: Prices were falling because technology was progressing. What had pushed the price of a bushel of wheat down to 67 cents in 1887 from $1.10 in 1882 was nothing more sinister than the opening up of new regions to cultivation (Australia, the Dakotas) and astounding improvements in agricultural machinery.

Source of book under review:
Wells, David A. Recent Economic Changes and Their Effect on Production and Distribution of Wealth and Well-Being of Society. New York: D. Appleton and Co., 1889.

Michael Perelman argues that in Recent Economic Changes, David Wells anticipates the substance, although not the wording, of Schumpeter’s “creative destruction”:
Perelman, Michael. “Schumpeter, David Wells, and Creative Destruction.” The Journal of Economic Perspectives 9, no. 3 (Summer 1995): 189-97.

(p. A13) Workers do well only when the economy grows at a healthy and consistent pace. The biggest threat to long-term economic growth is government growth of the magnitude that characterized the past two years and that is forecast for our future.
Our current problems are not a result of acts of nature. They stem from policy choices that dramatically increased the size of the government. In the past two years, the federal budget has grown by a whopping 16%.
. . .
. . . , the price of the stimulus is what appears to be a permanent increase in the size of government that will continue to slow economic growth. Most economists believe that high debt and high taxes each contributes to slow economic growth, which hurts workers both in the short and long run.

For the full commentary, see:
EDWARD P. LAZEAR. “OPINION; How Big Government Hurts the Average Joe; Job growth is very closely linked to GDP growth. If the economy is not growing, then jobs aren’t being added.” The Wall Street Journal (Fri., August 5, 2011): A13.
(Note: ellipses added.)

Jon Favreau. Source of photo: online version of the NYT article quoted and cited below.

(p. 11) You’ve announced you won’t be doing the third “Iron Man” movie, in order to make “Magic Kingdom,” which is a Disney movie about a family that gets caught inside Disneyland. A movie produced by Disney about a Disney theme park? It sounds a little cynical.

That’s my Rubik’s Cube that I have to solve on this one. I found a writing partner in the novelist Michael Chabon, who shares a passion for the ambition of Walt.

(p. 130) . . . in the early 1870s Hermann Sprengel, a German chemist working in London, invented a device that came to be called the Sprengel mercury pump. This was the crucial invention that actually made household illumination possible. Unfortunately, only one person in history thought Hermann Sprengel deserved to be better known: Hermann Sprengel. Sprengel’s pump could reduce the amount of air in a glass chamber to one-millionth of its normal volume, which would enable a filament to glow for hundreds of hours. All that was necessary now was to find a suitable material for the filament. 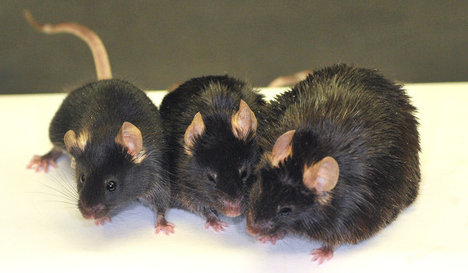 “An obese mouse given the drug SRT-1720, center, and one not given the drug, right.” Source of caption and photo: online version of the NYT article quoted and cited below.

(p. A1) Sustaining the flickering hope that human aging might somehow be decelerated, researchers have found they can substantially extend the average life span of obese mice with a specially designed drug.

The drug, SRT-1720, protects the mice from the usual diseases of obesity by reducing the amount of fat in the liver and increasing sensitivity to insulin. These and other positive health effects enable the obese mice to live 44 percent longer, on average, than obese mice that did not receive the drug, according to a team of researchers led by Rafael de Cabo, a gerontologist at the National Institute on Aging.
Drugs closely related to SRT-1720 are now undergoing clinical trials in humans.
The findings “demonstrate for the first time the feasibility of designing novel molecules that are safe and effective in promoting longevity and preventing multiple age-related diseases in mammals,” Dr. de Cabo and colleagues write in Thursday’s issue of the new journal Scientific Reports. Their conclusion supports claims that had been thrown in doubt by an earlier study that was critical of SRT-1720.
A drug that makes it cost-free to be obese may seem more a moral hazard than an incentive to good health. But the rationale behind the research is somewhat different: the researchers are trying to capture the benefits that allow mice on very low-calorie diets to live longer. It just so happens that such benefits are much easier to demonstrate in mice under physiological stress like obesity than in normal mice.
. . .
. . . , a small pharmaceutical concern in Cambridge, Mass., designed SRT-1720 and a set of similar drugs to mimic resveratrol — the trace ingredient of red wine that is thought to activate protective proteins called sirtuins.
The sirtuins help bring about the 30 percent extension of life span enjoyed by mice and rats that are kept on very low-calorie diets.

(p. A21) . . . we already know what isn’t working: the economic policy of the past two years — and the millions of Americans who should have jobs, but don’t. 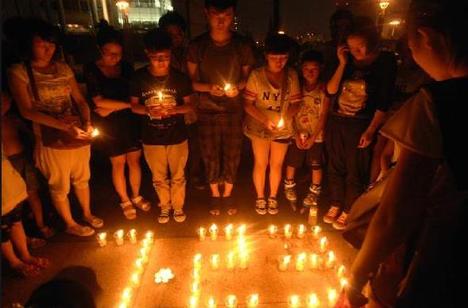 “Online critics have scornfully contrasted the difference between government rhetoric about the promise of high-speed rail and the reality of the troubled network. Local residents mourned victims of the train crash in Wenzhou on July 26.” Source of caption and photo: online version of the WSJ article quoted and cited below.

(p. C1) China’s high-speed rail system is an apt metaphor for the country’s hurtling economy over the past decade: a colossal investment project, born of the state, steeped in corruption, built for maximum velocity, and imposed paternalistically on a public that is at once amazed and skeptical. The rail system has married foreign technology with national ambition in a network billed as the biggest and most advanced in the world, in a country whose per capita income ranks below that of Jamaica.

For the full commentary, see:
JASON DEAN And JEREMY PAGE. “Trouble on the China Express; The wreck of a high-speed train has enraged the Chinese public and focused attention on the corruption and corner-cutting behind the country’s breakneck economic growth.” The Wall Street Journal (Sat., JULY 30, 2011): C1-C2.

(p. 123) Gas was particularly popular in America and Britain. By 1850 it was available in most large cities in both countries. Gas remained, however, a (p. 124) middle-class indulgence. The poor couldn’t afford it and the rich tended to disdain it, partly because of the cost and disruption of installing it and partly because of the damage it did to paintings and precious fabrics, and partly because when you have servants to do everything for you already there isn’t the same urgency to invest in further conveniences. The ironic upshot, as Mark Girouard has noted, is that not only middle-class homes but institutions like lunatic asylums and prisons tended to be better lit – and, come to that, better warmed – long before England’s stateliest homes were.