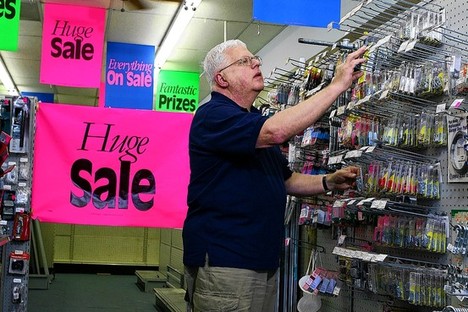 “David Wetzel tried for two years to sell his New Jersey hardware store.” Source of caption and photo: online version of the WSJ article quoted and cited below.

(p. B1) Small-business owners banking on a big payoff when they sell their establishments may have to settle for a lot less than planned.

(p. B4) “Owners still think their businesses are worth what they used to be,” says Thomas Coffey, a partner in Malvern, Pa., with B2BCFO, a provider of outsourced chief financial officers to small businesses. In reality, many “small companies just aren’t earning what they used to earn,” he says.

(p. A18) . . . government attempts to rejuvenate regional economies have a mixed track record, in the U.K. and elsewhere.

Stuart S. Rosenthal, an economics professor at Syracuse University, remembers driving through Virginia in 1997 and seeing a sign saying, “You are entering southwest Virginia’s high tech corner.”
“And all I could see was cows and farms,” he said. Recent employment data shows that aside from one pocket, little has changed. 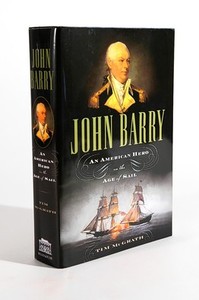 Like most of his fellow students, Barry stayed on just long enough get a grasp on the three Rs without abandoning his Catholic faith. One result of this abbreviated education was a lifelong tendency to keep all correspondence as short and simple as possible. Thus this brave, able man of action left only a minimal paper trail for future historians and biographers. John Paul Jones–an eloquent, prolific and unabashedly self-promoting letter writer–has inspired at least three major biographies in the past few years alone. It has been 72 years since the appearance of the last reliable biography of his rival, William Bell Clark’s “Gallant John Barry.”

The book under review is:
McGrath, Tim. John Barry: An American Hero in the Age of Sail. Yardley, PA: Westholme Publishing, 2010.

Below I quote from the comments that Home Depot co-founder Ken Langone addressed to President Obama:

(p. A21) A little more than 30 years ago, Bernie Marcus, Arthur Blank, Pat Farrah and I got together and founded The Home Depot. Our dream was to create (memo to DNC activists: that’s build, not take or coerce) a new kind of home-improvement center catering to do-it-yourselfers. The concept was to have a wide assortment, a high level of service, and the lowest pricing possible.

We opened the front door in 1979, also a time of severe economic slowdown. Yet today, Home Depot is staffed by more than 325,000 dedicated, well-trained, and highly motivated people offering outstanding service and knowledge to millions of consumers.
If we tried to start Home Depot today, under the kind of onerous regulatory controls that you have advocated, it’s a stone cold certainty that our business would never get off the ground, much less thrive. Rules against providing stock options would have prevented us from incentivizing worthy employees in the start-up phase–never mind the incredibly high cost of regulatory compliance overall and mandatory health insurance. Still worse are the ever-rapacious trial lawyers.
Meantime, you seem obsessed with repealing tax cuts for “millionaires and billionaires.” Contrary to what you might assume, I didn’t start with any advantages and neither did most of the successful people I know. I am the grandson of immigrants who came to this country seeking basic economic and personal liberty. My parents worked tirelessly to build on that opportunity. My first job was as a day laborer on the construction of the Long Island Expressway more than 50 years ago. The wealth that was created by my investments wasn’t put into a giant swimming pool as so many elected demagogues seem to imagine. Instead it benefitted our employees, their families and our community at large.

For the full commentary, see:
KEN LANGONE. “Stop Bashing Business, Mr. President; If we tried to start The Home Depot today, it’s a stone cold certainty that it would never have gotten off the ground.” The Wall Street Journal (Fri., OCTOBER 15, 2010): A21. 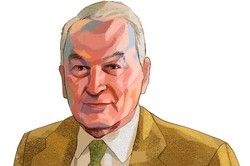 Manuel “Muso” Ayau. Source of image: online version of the WSJ article quoted and cited below.

High on a hill overlooking this picturesque volcanic lake, Manuel “Muso” Ayau–arguably Latin America’s most influential champion of liberty in the second half of the 20th century–was laid to rest last month.
. . .
Ayau and his colleagues read voraciously and debated vociferously. “All of us were self-taught in these subjects, which would come to absorb much of our time,” he recalled. Over the next half century CEES would publish over 900 pamphlets in defense of the market. Ayau’s many contributions (98) had titles like “On the Morality of Government,” “Planning: Rational or Absurd,” and “Robinson and Friday Invent the Common Market.” In October 1978 he wrote an essay in a CEES pamphlet called “Price Controls,” while Milton Friedman penned “In Defense of Dumping” in the same publication.
Those pamphlets went all over the region. Peruvian Enrique Ghersi, one of the co-authors of the 1986 best-seller “The Other Path,” says that one called “Ten Lessons for Underdevelopment” was “key to awakening in me the vocation and commitment to defend liberty.” CEES brought to Guatemala such intellectual giants as Ludwig von Mises (1964), Friedrich Hayek (1965) and Ludwig Erhard (1968). 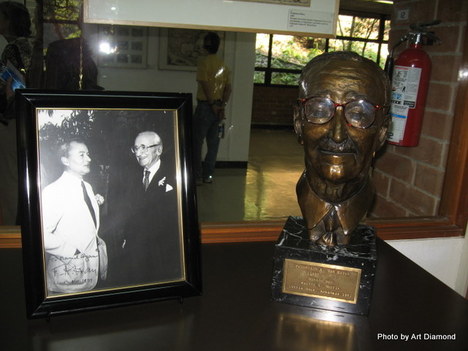 On the left is a photo autographed by Ayau and Hayek. On the right is a bust of Hayek. Source of photo: taken by Art Diamond on April 4, 2009 at the APEE meetings held at Francisco Marroquín University (UFM) in Guatemala City.

(p. A8) The Social Security Administration sent about 89,000 stimulus payments of $250 each to dead and incarcerated people–but almost half of them were returned, a new inspector-general’s report found.
. . .
. . . 17,000 payments went to recipients who were in prison at the time the payment was made in May 2009. However, not all of those payments were necessarily against the letter of the law. While lawmakers intended to prevent payments to people in prison, the law included only a provision prohibiting payments to people incarcerated in the three months before the plan was passed–from November 2008 through January 2009.
. . .
. . . : The SSA says that the stimulus package didn’t include a provision allowing it to try to retrieve funds that were mistakenly sent out, so it can’t try to retrieve the rest of the money. Money transferred electronically may be sitting untouched in bank accounts of dead people.
The combined total of the mistaken payments is $22.3 million. About $12 million hasn’t been returned. 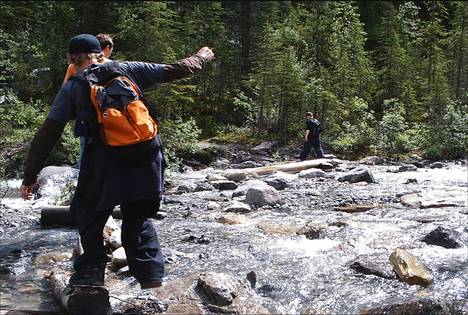 In The Venturesome Economy book, and later (pp. 129 and 142) in the book quoted below, Bhidé describes the entrepreneur’s decision process as “improvisation.”

(p. 18) Entrepreneurs who start uncertain businesses with limited funds have little reason to devote much effort to prior planning and research. They cannot afford to spend much time or money on the research; the modest likely profit doesn’t merit much; and the high uncertainty of the business limits its value.

Sketchy planning and high uncertainty require entrepreneurs to adapt to many unanticipated problems and opportunities. One entrepreneur likens the process of starting a new business to jumping from rock to rock up a stream rather than constructing the Golden Gate Bridge from a detailed blueprint. Often, to borrow a term from Elster’s discussion of biological evolution, entrepreneurs adapt to unexpected circumstances in an “opportunistic” fashion: Their response derives from a spur-of-the- moment calculation made to maximize immediate cash flow. Capital-constrained entrepreneurs cannot afford to sacrifice short-term cash for long-term profits. They have to play rapid-fire pinball rather than a strategic game of chess. 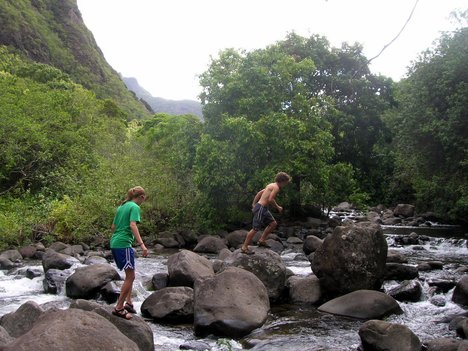 “Chris and Andrea Jumping from Rock to Rock Up a Stream.” Source of caption and photo: http://picasaweb.google.com/lh/photo/Q-FvMT8GFG7kZdvUm8d_Jw 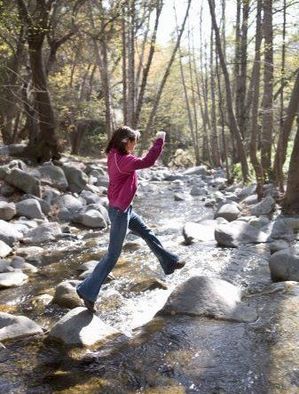 (p. A19) ONE day in early 1970, a cross-country skier got lost along the 46-mile Kekekabic Trail, which winds through the Boundary Waters Canoe Area Wilderness in northern Minnesota. Unable to make his way out, he died of exposure.

In response, the Forest Service installed markers along the trail. But when, years later, it became time to replace them, the agency refused, claiming that the 1964 Wilderness Act banned signage in the nation’s wilderness areas.
. . .
Over the decades an obvious contradiction has emerged between preservation and access. As the Forest Service, the National Park Service and the Bureau of Land Management — each of which claims jurisdiction over different wilderness areas — adopted stricter interpretations of the act, they forbade signs, baby strollers, certain climbing tools and carts that hunters use to carry game.
As a result, the agencies have made these supposedly open recreational areas inaccessible and even dangerous, putting themselves in opposition to healthy and environmentally sound human-powered activities, the very thing Congress intended the Wilderness Act to promote.

Arne Duncan. Source of photo: online version of the NYT article quoted and cited below.

(p. 26) Have you seen the new film “Waiting for Superman,” a documentary opening this week that makes public education in this country seem totally dysfunctional?
I did. I think it’s going to help the country to understand the tremendous sense of urgency that I feel. We have parents who know their child is getting a subpar education. That is devastating to them and ultimately it’s devastating to our country.
The film blames teachers’ unions for the failure of public schools because the unions have made it almost impossible to fire lazy teachers. Are you against teachers’ unions?
Of course not. I’m a big fan of Randi’s.

Randi Weingarten, of the American Federation of Teachers? The film depicts her as a villain.
I think Randi is providing some courageous leadership and is actually taking some heat internally in the union because she said publicly that the union shouldn’t be protecting bad teachers.

(p. A15) Today’s technology behemoth risks becoming tomorrow’s dinosaur, and competitors sometimes plead for government intervention to obtain what they fail to achieve in the market. As a former head of a competition agency, I offer . . . principles to guide competition policy toward successful innovators.

. . . , be wary of competitor complaints. When a competitor tells government that its rival acts unfairly, the complaint should be viewed with great suspicion. Competitor complaints are driving recent EU investigations into companies that include Qualcomm, Google, Oracle and IBM. Competitors can provide valuable information about marketplace realities, but they have every incentive to misuse the government to obtain an advantage that is otherwise unattainable.
. . .
. . . , don’t create disincentives for innovation. Complaining competitors often want innovators to be forced to share the source of their success, regardless of intellectual property rights. Nothing could be more destructive to the incentives for future innovation than rules that prevent innovators from reaping the full benefits of their work. As a unanimous U.S. Supreme Court said in its 2004 Verizon v. Trinko decision, “[f]irms may acquire monopoly power by establishing an infrastructure that renders them uniquely suited to serve their customers.”

For the full commentary, see:
TIMOTHY J. MURIS. “Antitrust in a High-Tech World; The first rule of regulators should be to be wary of complaints from competitors..” The Wall Street Journal (Tues., August 12, 2010): A15.
(Note: ellipses added.)