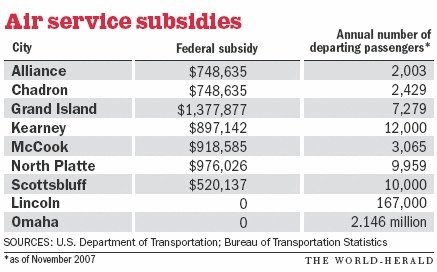 Source of graphic: the online version of the Omaha World-Herald article quoted and cited below.

(p. 1A) WASHINGTON — Opponents of federal air travel subsidies make two points: that subsidized airports are relatively close to regular commercial air service and subsidized flights are used by only a few people a day.
Both are true in Nebraska.
For example, U.S. taxpayers spend nearly $1.4 million a year so that fewer than two dozen travelers a day, on average, can fly out of Grand Island rather than drive the 100 miles to Lincoln.
Taxpayers also chip in $748,635 annually to maintain two daily flights from Alliance to Denver, even though only about a half dozen people a day board the planes.
. . .
(p. 2A) Groups such as Taxpayers for Common Sense and Citizens Against Government Waste say that although the subsidies might have made sense 30 years ago, to prevent communities from losing air service overnight, people know what they’re getting into today if they choose to live far from a city with regular air service.
It’s a matter of prioritizing public spending, said Steve Ellis, vice president of Taxpayers for Common Sense.
“People have the right to food and clean water,” Ellis said. “We don’t need to make sure it’s a chicken in every pot and air service in every community.”