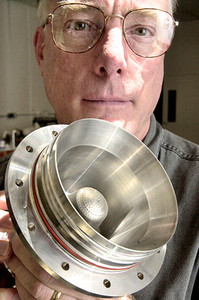 “Jim Benson” Source of caption and photo: online version of the WSJ obituary quoted and cited below.

(p. A10) “A number of people had told me they wanted to start space businesses,” Mr. Huntress says, “but they always wanted government money. Jim said he didn’t want any government money. He just wanted the opportunity to compete. That got my attention.”

He thought he’d found a business model. “We offer FedEx-like package delivery rides,” he proclaimed in 1999. He imagined getting customers like NASA itself and the armed forces, as well as scientists and industry. Always looking for an angle, he also envisioned a more terrestrial use for his rockets: sending a package from San Jose, Calif., to Taipei in 20 minutes.

With organizational ability he developed at software start-ups in the 1980s, Mr. Benson assembled a team of mostly young engineers plus some NASA veterans and set to work. To avoid high development costs, he used off-the-shelf technologies and designs. He quickly landed several contracts, including one from the University of California at Berkeley for ChipSat, a small satellite built for carrying scientific instruments to study interstellar gas. It cost $7 million to build — peanuts in space bucks — and has continued to function since its 2003 launch.

(p. A7) Ayn Rand died more than a quarter of a century ago, yet her name appears regularly in discussions of our current economic turmoil. Pundits including Rush Limbaugh and Rick Santelli urge listeners to read her books, and her magnum opus, “Atlas Shrugged,” is selling at a faster rate today than at any time during its 51-year history.
. . .
Rand . . . noted that only an ethic of rational selfishness can justify the pursuit of profit that is the basis of capitalism — and that so long as self-interest is tainted by moral suspicion, the profit motive will continue to take the rap for every imaginable (or imagined) social ill and economic disaster. Just look how our present crisis has been attributed to the free market instead of government intervention — and how proposed solutions inevitably involve yet more government intervention to rein in the pursuit of self-interest.
Rand offered us a way out — to fight for a morality of rational self-interest, and for capitalism, the system which is its expression. And that is the source of her relevance today. 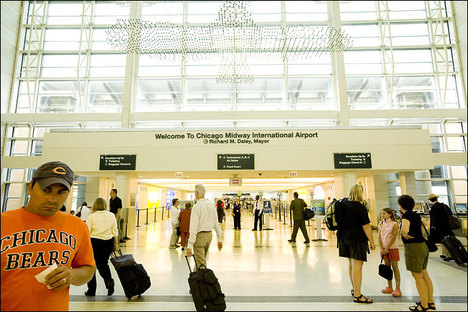 “One aviation expert said the Midway deal was a way to overcome inefficiencies of public airports.” Source of caption and photo: online version of the NYT article quoted and cited.

(p. A16) CHICAGO — Midway Airport is poised to become the first large privately run hub airport in the country, officials said Tuesday, after an investment group bid $2.52 billion to win rights to a long-term lease.
. . .
An aviation expert at the Brookings Institution, Clifford Winston, said he saw the deal’s attractiveness as helping to overcome “the vast inefficiencies of public sector airports.”
“The Midway experiment is important,” Mr. Winston said, “but it’s only a tiny step.”

(p. 144) The reason the system of capitalism without capitalists is failing throughout most of Europe is that it misconceives the essential nature of growth. Poring over huge aggregations of economic data, economists see the rise to wealth as a slow upward climb achieved through the marginal productivity gains of millions of workers, through the slow accumulation of plant and machinery, and through the continued improvement of “human capital” by advances in education, training, and health. But, in fact, all these sources of growth are dwarfed by the role of entrepreneurs launching new companies based on new concepts or technologies. These gains generate the wealth that finances the welfare state, that makes possible the long-term investments in human capital that are often seen as the primary source of growth.

“Charles Yogi, 89, a track & field athlete, is part of the Hawaii Lifespan Study.” Source of caption and photo: online version of the WSJ story quoted and cited below.

(p. A18) Based on animal experiments, gerontologists believe that one key to a healthy, longer lifespan may be found in a few master genes that affect cellular responses to famine, drought and other survival stresses. The more active these genes are, the longer an organism seems to survive — at least in the laboratory. Moreover, researchers are convinced that some genes may protect us against the risks of heart disease, diabetes, cancer and dementia.
. . .
Recent insights into the genetics of aging among simple organisms are stoking their enthusiasm. In January, for example, gerontologist Valter Longo at the University of Southern California reported that by altering two genes he made yeast that lived 10 times longer than normal. “We can really reprogram the lifespan of these organisms,” he said. In March, scientists at the University of Washington identified 15 genes regulating lifespan in yeast and worms that resemble genes found in humans. At least three companies are working independently on potential therapies based on the discovery that life span in mammals may be regulated partly by genetically controlled enzymes called sirtuins.

For the full story, see:
ROBERT LEE HOTZ. “Secrets of the ‘Wellderly’; Scientists Hope to Crack the Genetic Code of Those Who Live the Longest.” The Wall Street Journal (Fri., SEPTEMBER 19, 2008): A18.
(Note: ellipsis added.)

Widely celebrated as one of those outsiders who gets New Orleans, the writer Dan Baum appeared at Octavia Books Tuesday night and found himself having to account for disparaging remarks he’d made about the city days before.

The crowd was at the bookstore to celebrate Baum’s book, “Nine Lives: Death and Life in New Orleans,” a book drawing lots of attention for its compassionate portrayal of New Orleans through the lives of nine residents chosen by the author.
But before much could be said about the book, Baum was asked about an interview that had been broadcast on NPR Marketplace. He had said so many good things about the city that host Kai Ryssdal asked him, “Do you worry that maybe you’ve been too captivated by New Orleans to see the destruction?”
Baum answered, “I’m a partisan. I’ll admit it. I love the city. People ask me, ‘What’s going to happen to New Orleans?’ And I say, look, you know I think that in 10 or 15 years New Orleans will be the disorganized, impoverished, violent, screwed up, corrupt city it was before the storm and that’s really the way they want it.”

Source is online version of:
“Author’s gaffe hurts the ones he loves.” Posted by Jarvis DeBerry, Columnist, The Times-Picayune February 22, 2009 1:00AM

(p. A1) Millionaire Nathan Myhrvold, renowned in the computer industry as a Renaissance man, has a less lofty message for tech companies these days: Pay up.

Over the past few years, the former Microsoft Corp. executive has quietly amassed a trove of 20,000-plus patents and patent applications related to everything from lasers to computer chips. He now ranks among the world’s largest patent-holders — and is using that clout to press tech giants to sign some of the costliest patent-licensing deals ever negotiated.
. . .
(p. A21) Mr. Myhrvold says the fact he doesn’t make actual products is irrelevant. He stresses that Intellectual Ventures helps small-time inventors by providing them with an aggressive buyer to sell their patents to.
Intellectual Ventures, which has about $5 billion under management, bears some similarities to a private-equity firm that operates investment funds for the benefit of investors. However, its largest fund has an unusual structure in which fund investors are also responsible for the lion’s share of the fund’s returns.
It works like this: Technology companies agree to pay patent-licensing fees to inoculate themselves against potential lawsuits by Intellectual Ventures. These fees are how the fund generates its returns. As part of the deal, though, these same companies also put up the cash Mr. Myhrvold uses to buy more patents, receiving an equity stake in the fund in return. 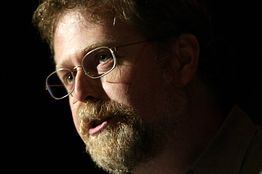 “Nathan Myhrvold’s message for tech firms: Pay up.” Source of caption and photo: online version of the WSJ article quoted and cited above.

(p. 131) . . . suffusing all the most visionary and idealistic prose of leftist economics is the same essential dream of the same static and technocratic destiny: capitalism without capitalists. Wealth without the rich, choice without too many things to choose, political and intellectual freedom without a vulgarian welter of individual money and goods, a social revolution every week or so without all this disruptive enterprise. 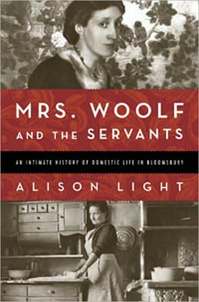 (p. W14) Like Lytton Strachey, John Maynard Keynes and others in the Bloomsbury group, Woolf came from a well-to-do Victorian family living in a large house. When her family woke in the morning, the fires were already lit; while the family was out, the house was cleaned; when the family members arrived home, dinner was served. Part of Woolf’s rebellion against her patrimony was trying to free herself from the limitations placed on the education of women, on their sexual freedom, on their earning power. But another part, as Ms. Light reminds us, was trying to free herself from the strictures of a bourgeois household. As soon as possible, Virginia and her sister, Vanessa, wore simpler clothes, refused to change for dinner, had slighter meals at irregular times and rejoiced in clutter.

It’s not easy so to escape one’s class, however. When the daughters of Leslie and Julia Stephen left home after their father’s death in 1904, they took the household cook with them. And though they pursued busy bohemian lives thereafter — routinely challenging the legacy of Victorian propriety even as they married and set up households of their own — they preserved at least one assumption of privilege: They always had servants, whom they often passed around among themselves as their own needs and desires changed.

One of the ironies that emerges from Ms. Light’s book is that Woolf’s mother, a product of the Victorian age, treated her servants with both dignity and affection, and they were in turn devoted to her. Anybody who has read in Woolf’s diaries and letters, however, knows that she can be a dreadful snob, and worse. The shocking extent of her acrimonious journal entries about Nellie Boxall, her cook of 18 years — a “mongrel” and “rubbish,” according to Woolf — partly inspired Ms. Light’s book.

(p. A25) Years ago, when I was a reporter, I remember getting a call from a woman in the Bronx who was screaming: “They’re over on Moshulu Parkway planting dead trees!”

A city work crew was, sure enough, digging holes along the side of the street and carefully sticking in brown and dried-up pieces of foliage. The men claimed the trees had simply lost their leaves for the winter — an explanation somewhat undermined by the fact that they were evergreens.
I’m telling you this because on Tuesday I was talking with a high-ranking Obama administration official about the stimulus plan. “There will be a dead tree planted, figuratively speaking,” he said somberly. “That will happen.”

For the full commentary, see:
GAIL COLLINS. “The Dead Tree Theory.” The New York Times (Thurs., February 25, 2009): A25.
(Note: the online version is dated Feb. 26, and has some substantial differences from the midwest print edition version I have, though there are only minor differences in the brief passages quoted above, which agree with my print copy.)