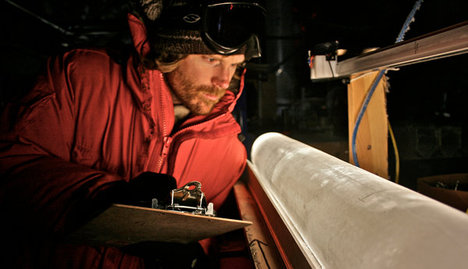 “Scientists like Brian Bencivengo of the National Ice Core Laboratory examine ice cores to determine past air temperatures at the location from which the core was obtained.” Source of caption and photo: online version of the NYT article quoted and cited below.

(p. A15) In the . . . journal Science, Shaun Marcott, an earth scientist at Oregon State University, and his colleagues compiled the most meticulous reconstruction yet of global temperatures over the past 11,300 years, virtually the entire Holocene. They used indicators like the distribution of microscopic, temperature-sensitive ocean creatures to determine past climate.
. . .
Scientists say that if natural factors were still governing the climate, the Northern Hemisphere would probably be destined to freeze over again in several thousand years. “We were on this downward slope, presumably going back toward another ice age,” Dr. Marcott said.
Instead, scientists believe the enormous increase in greenhouse gases caused by industrialization will almost certainly prevent that.
During the long climatic plateau of the early Holocene, global temperatures were roughly the same as those of today, at least within the uncertainty of the estimates, the new paper shows. This is consistent with a large body of past research focused on the Northern Hemisphere, which showed a distribution of ice and vegetation suggestive of a relatively warm climate.