Notwithstanding the assurances that the pope, the council, and the emperor had given him, Hus was almost immediately vilified and denied the opportunity to speak in public. On November 28, barely three weeks after he arrived, he was arrested on order of the cardinals and taken to the prison of a Dominican monastery on the banks of the Rhine. There he was thrown into an underground cell through which all the filth of the monastery was discharged. When he fell seriously ill, he asked that an advocate be appointed to defend his cause, but he was told that, according to canon law, no one could plead the cause of a man charged with heresy. In the face of protests from Hus and his Bohemian supporters about the apparent violation of his safe-conduct, the emperor chose not to intervene. He was, it was said, uncomfortable about what seemed a violation of his word, but an English cardinal had reportedly reassured him that “no faith need be kept with heretics.”

Source:
Greenblatt, Stephen. The Swerve: How the World Became Modern. New York: W. W. Norton & Company, 2011.
(Note: this quote is from somewhere on pp. 167-168; I bought the Kindle version which does not give page numbers correctly and I can’t recover pages on this one from Google books; I would guess it is all on p. 168.)

(p. C7) [A] milestone in the diary comes in 1943 when [Guéhenno’s] students are drafted into compulsory work service in Germany; many escape to Spain or join resistance groups. Nor was Guéhenno exempt from the repression. That same year he was demoted by the Vichy education minister to the rank of a beginning instructor, assigned to teach 17 hours of class a week rather than the usual six and faced with supervising hundreds of students. “Stammering with fatigue,” he wondered how he would have time to keep his diary going. But he cheered up whenever he contemplated how many of the authors in his curriculum were bona fide revolutionaries: “Voltaire, Rousseau, Diderot, Danton, Robespierre, Chénier, Hugo, Michelet …, I have nothing to discuss but suspects.” He liked to end his class sessions by shouting “Et la liberté!”

(p. C1) . . . , without hesitation or (for the most part) complaint, proudly responding to the call-up, Israelis stand ready to defend their nation. They risk their lives for an idea.
The idea is Zionism. It is the belief that the Jewish people should have their own sovereign state in the Land of Israel. Though founded less than 150 years ago, the Zionist movement sprung from a 4,000-year-long bond between the Jewish people and its historic homeland, an attachment sustained throughout 20 centuries of exile. This is why Zionism achieved its goals and remains relevant and rigorous today. It is why citizens of Israel–the state that Zionism created–willingly take up arms. They believe their idea is worth fighting for.
Yet Zionism, arguably more than any other contemporary ideology, is demonized. “All Zionists are legitimate targets everywhere in the world!” declared a banner recently paraded by anti-Israel protesters in Denmark. “Dogs are allowed in this establishment but Zionists are not under any circumstances,” warned a sign in the window of a Belgian cafe. A Jewish demonstrator in Iceland was accosted and told, “You Zionist pig, I’m going to behead you.”
. . .
What is it about Zionism that elicits such loathing? After all, the longing of a dispersed people for a state of their own cannot possibly be so repugnant, especially after that people endured centuries of massacres and expulsions, culminating in history’s largest mass murder. Perhaps revulsion toward Zionism stems from its unusual blend of national identity, religion and loyalty to a land. Japan offers the closest parallel, but despite its rapacious past, Japanese nationalism doesn’t evoke the abhorrence aroused by Zionism.
Clearly anti-Semitism, of both the European and Muslim varieties, plays a role. Cabals, money grubbing, plots to take over the world and murder babies–all the libels historically leveled at Jews are regularly hurled at Zionists. And like the anti-Semitic capitalists who saw all Jews as communists and the communists who painted capitalism as inherently Jewish, the opponents of Zionism portray it as the abominable Other.

(p. B1) Of all the headaches of her current book tour — the declining sales, the constant travel, the interviews that generated unkind headlines about her family’s wealth — this one may sting Hillary Rodham Clinton the most: Her memoir, “Hard Choices,” has just been toppled from its spot on the best-seller list by a sensational Clinton account by her longtime antagonist Edward Klein.
. . .
. . . : the conservative book-buying public, . . . has continued to generate sales despite the industry’s overall slump, . . .

For the full story, see:
AMY CHOZICK and ALEXANDRA ALTER. “A Provocateur’s Book on Clinton Overtakes Her Memoir in Sales.” The New York Times (Fri., July 11, 2014): B1 & B6.
(Note: ellipses added.)
(Note: the online version of the article has the date JULY 10, 2014, and has the title “A Provocateur’s Book on Hillary Clinton Overtakes Her Memoir in Sales.”)

(p. 158) A decade older than his apostolic secretary Poggio, Baldassare Cossa had been born on the small volcanic island of Procida, near Naples. His noble family held the island as its personal possession, the hidden coves and well-defended fortress evidently well suited to the principal family occupation, piracy. The occupation was a dangerous one: two of his brothers were eventually captured and condemned to death. Their sentence was commuted, after much pulling of strings, to imprisonment. It was said by his enemies that the young Cossa participated in the family business, owed to it his lifelong habit of wakefulness at night, and learned from it his basic assumptions about the world.
Procida was far too small a stage for Baldassare’s talents. Energetic and astute, he early displayed an interest in what we might call higher forms of piracy. He studied jurisprudence at the University of Bologna–in Italy it was legal studies rather than theology that best prepared one for a career in the Church–where he obtained doctorates in both civil and canon law. At his graduation ceremony, a colorful affair in which the successful candidate was conducted in triumph through the town, Cossa was asked what he was going to do now. He answered,” To be Pope.”

(p. 20) The biggest problem with Malthusiasm, as Mayhew addresses at length, is that Malthus was wrong. He thought England was nearing the limits of its ability to provide for its growing population. But as that population continued to grow in the 19th century, the country proved more than able to feed itself by increasing agricultural productivity and importing food that it could easily pay for with its industrial wealth. And toward the end of the century, birthrates began falling and population growth slowed.
. . .
There is evidence enough in this book for a pretty withering attack on Malthusianism, if not on Malthus. Mayhew, however, prefers the role of calm and evenhanded guide. At the end he’s even hinting that today’s Malthusian prophets of environmental doom are on to something. They may be: Just because Malthus was wrong about nature’s limits in 1798 doesn’t prove we won’t ever hit those limits. Past performance is no guarantee of future results. Still, you’d think it would put more of a damper on people’s Malthusiasm.

The book being reviewed is:
Mayhew, Robert J. Malthus: The Life and Legacies of an Untimely Prophet. Cambridge, MA: Belknap Press, 2014.

(p. A13) Why are large tech companies losing the ability to innovate? Entrepreneur and author Salim Ismail studies the new generation of “exponential corporations,” enterprises that grow 10 times faster than the average rate. He believes that established companies simply aren’t structured for this kind of speed. So their only choice is to buy those companies that can still innovate rapidly.
If Mr. Ismail is correct–and the current dynamic in Silicon Valley suggests that he may be–we’re on the brink of a major restructuring of business strategy, venture capital and almost every part of the high-tech world. It may be time to stop waiting for famous tech companies to roll out the hottest new product and start investing in startups that can sell their innovations to big companies. Tech appears to be evolving into a different kind of field: one that is, paradoxically, more static at the top but also more dependent on entrepreneurship than ever before.

For the full commentary, see:
MICHAEL S. MALONE. “An Innovation Slowdown at the Tech Giants; Seen anything new and big lately from Cisco, Yahoo or even Twitter?” The Wall Street Journal (Weds., July 2, 2014): A13.
(Note: the online version of the commentary has the date July 1, 2014.)

The Ismail research mentioned above, is discussed further in:
Ismail, Salim, Mike Malone, and Yuri van Geest. Exponential Organizations: Why New Organizations Are Ten Times Better, Faster, Cheaper Than Yours (and What to Do About It). New York: Diversion Books, 2014. 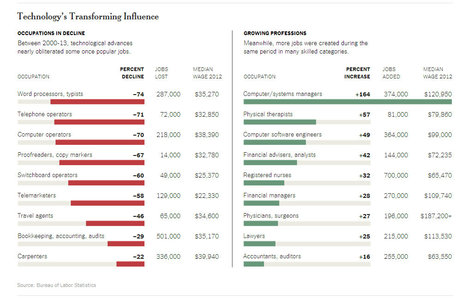 (p. 4) JUST over 50 years ago, the cover of Life magazine breathlessly declared the “point of no return for everybody.” Above that stark warning, a smaller headline proclaimed, “Automation’s really here; jobs go scarce.”
As events unfolded, it was Life that was nearing the point of no return — the magazine suspended weekly publication in 1972. For the rest of America, jobs boomed; in the following decade, 21 million Americans were added to the employment rolls.
Throughout history, aspiring Cassandras have regularly proclaimed that new waves of technological innovation would render huge numbers of workers idle, leading to all manner of economic, social and political disruption.
As early as 1589, Queen Elizabeth I refused a patent on a knitting machine for fear it would put “my poor subjects” out of work.
In the 1930s, the great John Maynard Keynes predicted widespread job losses “due to our discovery of means of economising the use of labour outrunning the pace at which we can find new uses for labour.”
So far, of course, they’ve all been wrong. But that has not prevented a cascade of shrill new proclamations that — notwithstanding centuries of history — “this time is different”: . . .

(p. 115) What Poggio accomplished, in collaboration with a few others, remains startling. They took Carolingian minuscule–a scribal innovation of the ninth-century court of Charlemagne–and transformed it into the script they used for copying manuscripts and writing letters. This script in turn served as the basis for the development of italics. They were then in effect the inventors of the script we still think of as at once the clearest, the simplest, and the most elegant written representation of our words. It is difficult to take in the full effect without seeing it for oneself, for example, in the manuscripts preserved in the Laurentian Library in Florence: the smooth bound volumes of vellum, still creamy white after more than five hundred years, (p. 116) contain page after page of perfectly beautiful script, almost magical in its regularity and fineness.

(p. C6) The outcome was perhaps foreshadowed, as Mr. Marciano points out, when President Ford, using a customary unit, noted that American industries were “miles ahead” when it came to adopting the metric system.
Mr. Marciano tells his story more or less without editorializing, until the end. Surveying the centuries of fights over measurement, he finishes on a rather intriguing point: Standardization no longer matters that much.
. . .
. . . , with the computerization of life, we don’t have to worry about converting from one measurement to another; our software does this for us. We can still speak in pounds or feet, even if everything in the world of manufacturing and technology is really, at bottom, done in the metric system. In the evocative terminology of Mr. Marciano, “the metric system can be our operating system without being our interface.”

The book being reviewed is:
Marciano, John Bemelmans. Whatever Happened to the Metric System?: How America Kept Its Feet. New York: Bloomsbury USA, 2014.