In a recent book, written for business managers, MIT business school professor David Simchi-Levi and his co-authors, discuss the secret of Wal-Mart’s success. In the following discussion a "cross-docking" system is one in which ". . ., warehouses function as inventory coordination points rather than as inventory storage points." (p. 63)

The tremendous market growth of Wal-Mart over the past 15 to 20 years highlights the importance of an effective strategy that coordinates inventory replenishment and transportation policies. Over this time period, Wal-Mart developed into the largest and highest-profit retailer in the world. A number of major components in Wal-Mart’s competitive strategy were critical to its success, but perhaps the most important has been its enthusiastic use of cross-docking. Wal-Mart delivers about 85 percent of its goods using cross-docking, as opposed to about 50 percent for Kmart. To facilitate cross-docking, Wal-Mart operates a private sattelite communications system that sends point-of-sale (POS) data to all its vendors, allowing them to have a clear picture of sales at all its stores. In addition, Wall-Mart has a dedicated fleet of 2000 trucks, and on-average, stores are replenished twice a week. Cross-docking enables Wal-Mart to achieve economies of scale by purchasing full truckloads. It reduces the need for safety stocks and has cut the cost of sales by 3 percent compared with the industry average, a major factor explaining Wal-Mart’s large profit margins. (p. 64) 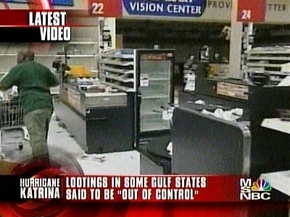 “In downtown New Orleans, where looters are floating garbage cans filled with clothing and jewelry down the street.” From an online slideshow of looting at Wal-Mart and Walgreens in New Orleans. Caption for photo, and photo itself, from: http://www.nbc10.com/slideshow/news/4917518/detail.html?qs=;s=4;p=news;dm=ss;w=400 (POSTED: 9:45 pm EDT August 30, 2005; UPDATED: 10:53 am EDT August 31, 2005; Downloaded Sept. 5, 2005)
Harold Andersen reports on the observations of his wife’s cousin, Michael Ross, a member of the faculty of the history department of Loyola University in New Orleans:

When the levees broke and put the major share of New Orleans under water, a substantial portion of the city was still dry because it was on higher ground, above sea level. Included were the French Quarter, some attractive residential neighborhoods and the land on which Loyola University is located.
There was some wind damage in the higher-ground areas of the city, but those areas were basically preserved and could have served as a base from which the city could be rebuilt.
“But they’re gone now, as a result of looting,” Ross told us.
The looting wasn’t random. Organized street gangs, armed with weapons stolen from looted stores, went about looting quickly and systematically, Ross said. In residential areas, they went down streets kicking in the doors of house after house after house, leaving the residences in shambles.
One unforgettable scene, Ross said, was the telecast showing five pickup trucks of gang members leaving a looted Wal-Mart store with dozens of weapons they had stolen.
Ross is pessimistic about the chances that Loyola and Tulane Universities will reopen this fall, even if their campuses are intact. Students, particularly new students, are most likely to be discouraged from attending school in a nearly destroyed city.
On a personal note, Ross expects that the house in which he has been living will be a victim of looting and his computer files are likely to have been destroyed.

Childress, Mark. “Tribute: What It Means to Miss New Orleans.” New York Times, Section 9 (September 4, 2005): 9 & 11.
OK, so then why is it that all us fast, energetic, efficient, go-get-’em Calvinists are responsible for coughing up billions to save a lifestyle we don’t much get to enjoy?