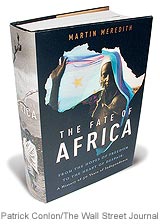 From a review of a promising book:

Most African countries have been atrociously governed in the past half-century. A lack of institutional checks has allowed an array of incompetent strongmen to rule as they pleased until the money ran out, at which point northern donors often tossed them an extra bundle of cash.
. . .
Kwame Nkrumah, for example, is widely revered. The founding father of independent Ghana, he was also an eloquent advocate of a united Africa. Africans tend to recall him as a man of great personal integrity who strove mightily to drag his country into the industrial age. Mr. Meredith lays out the facts. Nkrumah paid for his grand (and uniformly loss-making) industrial projects by squeezing money out of Ghana’s poorest citizens, the peasants, and by borrowing recklessly. He was utterly clueless about money. When his finance minister told him in 1963 that the national reserves were less than $1.4 million, he “sat in silence for fifteen minutes, then broke down and wept.”
He not only wrecked the Ghanaian economy; he also snuffed out such political freedoms as the country had enjoyed at independence. He had a law passed in 1958 allowing him to jail anyone suspected of subversive intentions. Twelve parliamentarians objected, on the ground that such a power was sure to be abused. Eleven of them were jailed, which rather proved their point.