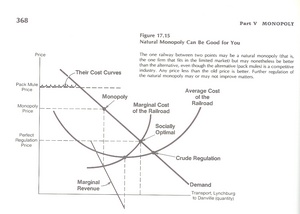 Comparisons between monopoly and competition, . . ., must be made gingerly. One is liable to fall into nonsense of the sort “If my grandmother had wheels she would be a tram.” (p. 366)

McCloskey, Donald N. The Applied Theory of Price. 2nd ed. New York: Macmillan Publishing Company, 1985.
The usual assumption in price theory texts is that the cost structure would be the same for an industry whether it was competitive or monopolized. The graph above, from McCloskey, is the only one I am aware of that tries to represent the realistic possibility that costs may be significantly lower in monopoly. Usually we think of new goods resulting from creative destruction, but Schumpeter also emphasized new processes, and the new processes presumably would often reduce costs.