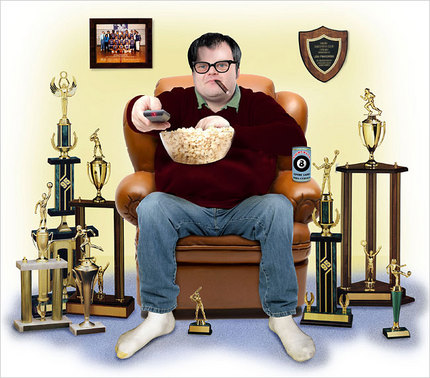 Source of image:  online version of the NYT article cited below.

(p. E1)  The dirty secret among former high school and college jocks is that many don’t remain active as adults.  In their glory days they were the fittest among their peers.  But as adults many are overtaken by nonjocks who embrace fitness as a commitment to health, forget the varsity letter.

Onetime elite athletes often languish once organized competition is over and a coach isn’t hounding them, sports scientists and exercise physiologists say.  Many are burned out.  Others become discouraged when their lackluster fitness can’t compare to their highlight reels.  Running on a treadmill in a sea of anonymous gym-goers doesn’t compare to the thrill of being an m.v.p. on campus.

"Basically, they’ve been to the mountaintop and now they’re on these little hills, and that is difficult to deal with," said Dan Gould, the director of the Institute for the Study of Youth Sports at Michigan State University in Lansing.

Extrinsic motivation is tricky business, said Dr. Gould, a professor of kinesiology.  He said he has found that athletes who played for trophies (p. E8) or attention are more at risk of becoming sedentary as adults than people who have taught themselves to get off the sofa and exercise, those with "intrinsic motivation."

One thought on “Exercising to Win, Hurts Lifetime Fitness”