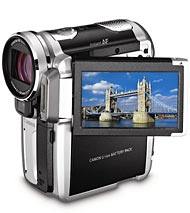 In the dot-com era, many believed that in each niche, the future belonged to the company that got-in, and got-big, first.  Sometimes this was called the ‘first mover advantage.’  There are many counter-examples.  Here is one more:

This image-quality business, as it turns out, is the new Canon’s specialty.  Talk about being blown away the first time you play back your recordings — let’s hope you have a sturdy couch.

Several advances are responsible for the brilliant picture quality.  First, Canon has paid extra attention to two of the most important aspects of HD recording:  focus and stability.  Because the high-def picture is so sharp and so wide, moments of blur-(p. C11)riness or hand-held jitters are far more noticeable and disturbing than in regular video.

So the front of the HV10 bears a special external sensor that, when you change your aim, handles the bulk of the refocusing extremely rapidly.  A standard through-the-lens focusing system does the fine tuning after that.  Together, these two mechanisms nearly eliminate the awkward moment of blurry focus-hunting that mars other camcorders’ output.

. . . , by entering the high-def camcorder market a year and a half after its rivals, Canon has played the same conservative waiting game it once used with digital cameras and camcorders.  Its goal, of course, is to watch and learn as the pioneers get all the arrows in their backs.

If the HV10 is any indication, the company is off to a very good start.