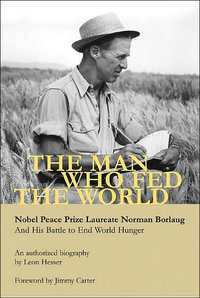 Who won the Nobel Peace Prize in 1970?  You may be forgiven for not remembering, given some of the prize’s dubious recipients over the years (e.g., Yasser Arafat).  Well, then:  Who has saved perhaps more lives than anyone else in history?  The answer to both questions is, of course, Norman Borlaug.

Who?  Norman Borlaug, 92, is the father of the "Green Revolution," the dramatic improvement in agricultural productivity that swept the globe in the 1960s.  He is now the subject of an admiring biography by Leon Hesser, a former State Department official who first met Mr. Borlaug 40 years ago in Pakistan, where they worked together to boost that country’s grain production.  "The Man Who Fed the World" describes, in a workmanlike way, how a poor Iowa farm boy trained in forestry and plant pathology came to be one of humanity’s greatest benefactors.

Mr. Borlaug is still tirelessly working to keep hunger at bay.  He remains a consultant to the International Maize and Wheat Improvement Center in Mexico and president of a private Japanese foundation working to spread the Green Revolution to sub-Saharan Africa.  He believes that biotechnology will be crucial to boosting world food supplies in the coming decades and decries the underfunding of the world’s network of nonprofit agricultural research centers.

He also laments the unnecessary suspicion with which biotech is treated these days.  "Activists have resisted research," he notes, "and governments have overregulated it."  They both miss the point. "Responsible biotechnology is not the enemy:  starvation is."

The reference to the book is: