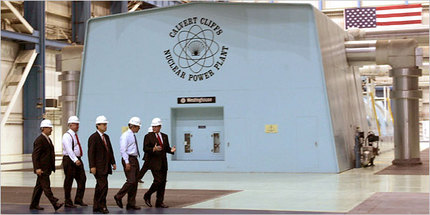 W tours one of Constellation Energy’s current nuclear power plants.  Source of the photo:  online version of the NYT article cited below.

(p. C1)  BALTIMORE — Nobody in the United States has started building a nuclear power plant in more than three decades.  Mayo A. Shattuck III could be the first.

As the chief executive of Constellation Energy, a utility holding company in Baltimore that already operates five nuclear reactors, Mr. Shattuck is convinced that nuclear power is on the verge of a renaissance, ready to provide reliable electricity at a competitive price.  He has already taken the first steps toward achieving that, moving recently to order critical parts for a new reactor.

The full story is strongly biased in favor of the standard politically correct environmentalist antagonism toward nuclear energy.  But if you want to read it anyway, see: 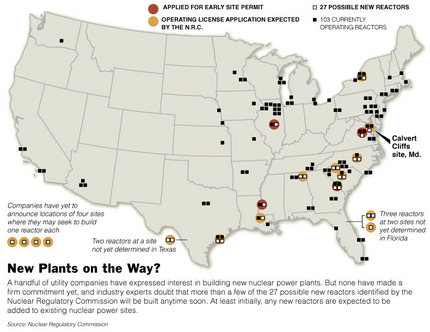 Source of map graphic:  online version of the NYT article cited above.