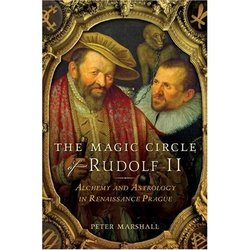 Ambassadors, nobles and church magnates routinely visited Prague Castle during Rudolf’s reign (1576-1612); so did astronomers and astrologists, alchemists, philosophers, charlatans and anyone else with something marvelous to relate.  Bureaucratic busybodies might wait months for an audience with the emperor, but his doors flew open for those with esoteric knowledge.

Prague Castle was the perfect emblem of Rudolf’s scattered interests.  It contained one of the greatest painting collections in Europe — including works by Durer, Arcimboldo, Titian and Veronese.  Its inventory also included Egyptian mummies, stuffed exotic birds, unicorn horns, whale teeth, bezoars (gall stones taken from the stomach of animals, thought to be antidotes to poison), the nails of Noah’s ark and one dried and preserved dragon.

If a visitor to the castle wandered into its library, he might well come across such dodgy works as "Arcana arcanissima," "De Alchemiae difficultatibus" and "Mysterium cosmographicum," many dedicated to the monarch by their grateful authors.  Yet if the visitor climbed to the top of the castle’s so-called Bishop’s Tower on a starry night, he might encounter the great astronomers Tycho Brahe and Johannes Kepler charting the sky.  Clearly, it was a magical moment in the history of Western civilization, when anything seemed possible.  Mr. Marshall brings it all wonderfully to life.

STUART FERGUSON.  "BOOKS; Sense and Sorcery in Prague; Ready for the Renaissance; but not quite prepared to give up the unicorn."  The Wall Street Journal  (Sat., September 9, 2006):  P9.

The book reference is: