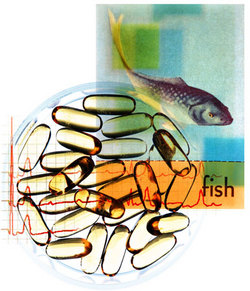 Source of graphic:  online verison of the NYT article quoted and cited below.

United States cardiologists are reluctant to prescribe fish oil, wanting more definitive data on efficacy.  But a lack of definitive data on efficacy doesn’t stop them from performing costly and risky procedures such as the application of stents.  Possibly relevant:  installing stents is much more lucrative for cardiologists, than prescribing fish oil.  Doctors are not bad people, but like most of us, they respond to financial incentives.

(p. D5) ROME — Every patient in the cardiac care unit at the San Filippo Neri Hospital who survives a heart attack goes home with a prescription for purified fish oil, or omega-3 fatty acids.

“It is clearly recommended in international guidelines,” said Dr. Massimo Santini, the hospital’s chief of cardiology, who added that it would be considered tantamount to malpractice in Italy to omit the drug.

In a large number of studies, prescription fish oil has been shown to improve survival after heart attacks and to reduce fatal heart rhythms.  The American College of Cardiology recently strengthened its position on the medical benefit of fish oil, although some critics say that studies have not defined the magnitude of the effect.

But in the United States, heart attack victims are not generally given omega-3 fatty acids, even as they are routinely offered more expensive and invasive treatments, like pills to lower cholesterol or implantable defibrillators.  Prescription fish oil, sold under the brand name Omacor, is not even approved by the Food and Drug Administration for use in heart patients.

“Most cardiologists here are not giving omega-3’s even though the data supports it — there’s a real disconnect,” said Dr. Terry Jacobson, a preventive cardiologist at Emory University in Atlanta.  “They have been very slow to incorporate the therapy.”