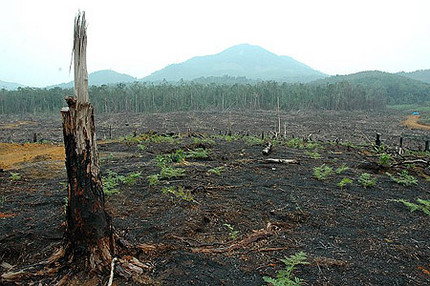 Forests are burned on plantations in Indonesia to clear land to produce palm oil which is "a key ingredient in biodiesel."  Source of caption quote and photo:  online version of WSJ article cited below.

(p. A1)  PONTIANAK, Indonesia — Investors are pouring billions of dollars into "renewable" energy sources such as ethanol, biodiesel and solar power that promise to reduce the world’s reliance on petroleum.  But exploiting these alternatives may produce unintended environmental and economic consequences that offset the expected benefits.

Here on the island of Borneo, a thick haze often encloses this city of 500,000 people.  The cause:  forest fires that have blazed across the island.  Many of them were set to clear land to produce palm oil — a key ingredient in biodiesel, a clean-burning diesel fuel alternative.

The bluish smoke is at times so dense that it leaves the city dark and gloomy even at midday.  The haze has sometimes closed Pontianak’s airport and prompted local volunteers to distribute face-masks on city streets.  From July through mid-October, Indonesian health officials reported 28,762 smog-related cases of respiratory illness across the country.

"I feel it in my breath when I breathe," said Imanuel Patasik, a 26-year-old delivery man, as he sat in one of Pontianak’s many open-air coffee shops on a recent evening.  When the smoke is really bad, he wears a mask to work, but still wakes up the next morning feeling sick.  "It’s part of life here," he sighed.

Seasonal rains have helped quell the fires over the past few weeks.  But the miasma of smoke from Borneo and the island of Sumatra — an annual phenomenon that blankets large parts of Southeast Asia in smog — underscores a troubling dark side of the world’s alternative-energy boom.  Among other problems, the fires in Indonesia spew millions of tons of carbon dioxide and other greenhouse gases into the atmosphere, experts say.  In doing so, they exacerbate the very global-warming concerns biofuels are meant to alleviate.

Such side effects are not an isolated problem.  In Indonesia, Malaysia, Canada and elsewhere, forests are being slashed for new energy-yielding crops or other unconventional fuels.  In India, environmental activists say, water tables are dropping as farmers try to boost production of ethanol-yielding sugar. 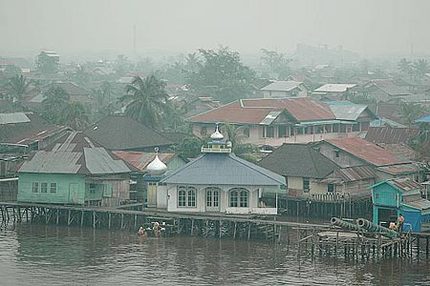 Midday in Pontianak the smoke haze from palm oil is dense, and causes respiratory problems.  Source of caption quote and photo:  online version of WSJ article cited above.