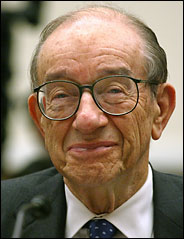 Why is this man smiling?  (Alan Greenspan has reason to grin.)  Source of photo:  online version of the NYT article cited below.

I believe that the market for economists is imperfectly competitive, since the supply and demand for academics is highly regulated by governmental and quasi-governmental institutions.  But it is interesting that the second highest book advance ever paid is going to Alan Greenspan.  Greenspan is a practical, eclectic, economist who believes that Schumpeter’s process of creative destruction is important for understanding the workings of a capitalist economy.

(p. C1)  Alan Greenspan, the former chairman of the Federal Reserve, has agreed to sell his memoir for an advance of more than $8.5 million, according to people involved in the negotiations, making a deal that appears to give him the second-largest advance ever paid for a nonfiction book.

(p. C8)  Mr. Greenspan’s advance ranks second only to the more than $10 million paid to former President Bill Clinton for his memoir, "My Life," which was published in June 2004. Pope John Paul II received an advance of $8.5 million in 1994 for his book, "Crossing the Threshold of Hope," and Senator Hillary Rodham Clinton received an $8 million advance for her memoir, "Living History," published in 2003.