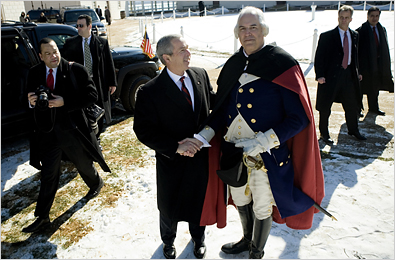 Bush meets an actor playing the role of Washington at Mount Vernon on President’s Day.  Source of photo:  online version of the NYT article cited below.

“With the advantage of hindsight, it is easy to take George Washington’s successes for granted,” Mr. Bush said after enumerating Washington’s achievements as commander of the Continental Army and later as president. But “America’s path to freedom was long and it was hard,” he continued, “and the outcome was never really certain.”

“I’m reading about George Washington still,” the president told reporters at a December news conference where he defended his Iraq policy. “My attitude is, if they’re still analyzing No. 1, 43 ought not to worry about it and just do what he thinks is right, and make the tough choices necessary.”

Mr. Bush spoke of General Washington’s “many challenges,” noting that the Continental Army “stood on the brink of disaster many times.” And he spoke of Washington’s resolute determination: “His will was unbreakable.”

The president spoke as well of a brief retirement at Mount Vernon between Washington’s return from the Revolutionary War and his presidency. Mr. Bush is already laying the groundwork for his own retirement with plans for a presidential library at Southern Methodist University, Laura Bush’s alma mater.

“All he wanted to do was return here to Mount Vernon and to be with his loving wife, Martha,” the 43rd president said of the first. “As he wrote with satisfaction to his friend Lafayette, ‘I am become a private citizen on the banks of the Potomac, and under the shadow of my own vine and my own fig tree.’ ”