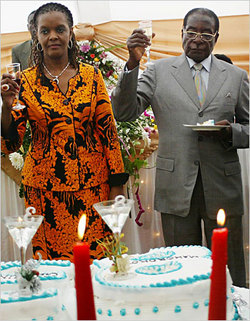 Tyrant Mugabe eats cake while his slaves starve.  Source of photo:  online version of the NYT article cited below.

JOHANNESBURG, Feb. 21 — President Robert G. Mugabe of Zimbabwe turned 83 on Wednesday to the strains of the song “God Bless President Mugabe” on state-controlled radio, along with an interview on state television, a 16-page paean to his rule in Harare’s daily newspaper and the prospect of a grand birthday party — costly enough to feed thousands of people for months, his critics argued — on Saturday.

Zimbabwe’s economy is so dire that bread vanished from store shelves across the country on Wednesday after bakeries shut down, saying government price controls were requiring them to sell loaves at a loss. The price controls are supposed to shield consumers from the nation’s rampant inflation, which now averages nearly 1,600 percent annually.

On Wednesday, The Herald, the state-managed newspaper, included in 16 pages of tributes to Mr. Mugabe an editorial calling him “an unparalleled visionary” and “an international hero among the oppressed and poor.”

“The guy is insensitive,” John Shiri, 41, a teacher at a primary school, told a local journalist. “There is no bread as we are talking, but he will be feasting and drinking with his family and hangers-on when there is no wheat in the country.”

Tawanda Mujuru, who runs a vegetable stall on Samora Machel Avenue in downtown Harare, said that she would be working in a factory if not for the failure of Mr. Mugabe’s economic policies.

“He has the guts to eat and drink when we are suffering like this,” she said. “Let him enjoy. Every dog has his day. We shall have our day.”