Source of graphs:  online version of the WSJ article cited below.

The graph on the left would not surprise Chris Anderson of The Long Tail.  Selling books online supplies greater variety, so that when online sales grow, overall book sales grow too.

(p. B1)  For six years, Borders Group Inc. has pursued a distinctly unfashionable strategy: betting big on bricks and mortar while paying little attention to the online world. But with online sales capturing an ever-increasing share of the book business, the No. 2 book retailer is reversing course.

Today, Borders announced its intention to reopen its own branded e-commerce Web site in early 2008, ending an alliance with Amazon.com Inc. that had been the core of its online strategy. 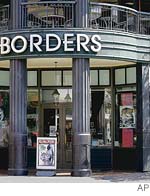 Photo on left is a Borders store; image on right is of Borders CEO George Jones.  Source of photo and image:  online version of the WSJ article cited above.