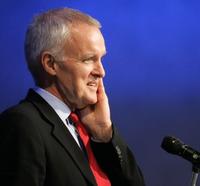 Such a retreat, Kerrey says, would hand radical Islamic terrorists a substantial victory and enable them to destroy the fledgling democracy in Iraq.

In an article published Tuesday and in an interview, Kerrey said terrorists would gain safe haven from which to launch further attacks on American citizens like those of Sept. 11, 2001.

Kerrey said that if the United States shows weakness in Iraq, it will "pay a terrible price."

"The forces of al-Qaida have demonstrated a tremendous capacity, and they’ll use that capacity if we withdraw from the playing field," said Kerrey, a former two-term U.S. senator.

In the interview, Kerrey also had a message for fellow Democrats: "Just because George Bush said it doesn’t mean it’s wrong."

The link to Kerrey’s opinion piece in the Wall Street Journal is: