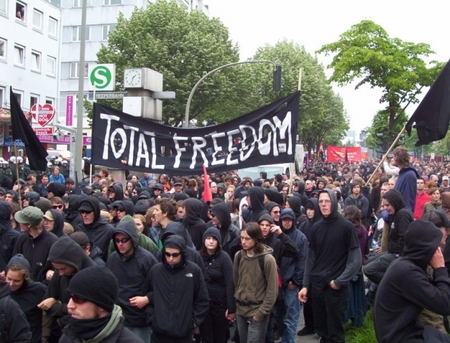 On Monday, May 28th, protesters at the G8 meeting in Hamburg, Germany protested for "Total Freedom" and against globalization.  Source of this version of the banner picture:  http://www.infoshop.org/inews/article.php?story=20070528131819740

A photo fairly similar to the one above was run in the print version of the NYT on Tuesday, May 29, 2007, but was not included in the online version.  It appeared by itself, without an attached article.  But, referring to the "Total Freedom" banner, it had the following wonderfully ironic caption:

Except, Perhaps, When It Comes to Trade

Thousands of protesters marched against globalization on Monday in Hamburg, Germany, where the Group of Eight industrialized nations will meet next week.  After the largely peaceful rally, some protesters clashed with police and 21 were arrested.  The rest, however, were totally free.

Source of the NYT version of the banner picture, and of the caption:

(Note:  caption title was in bold, and in larger font than the body of the caption, in the original.)