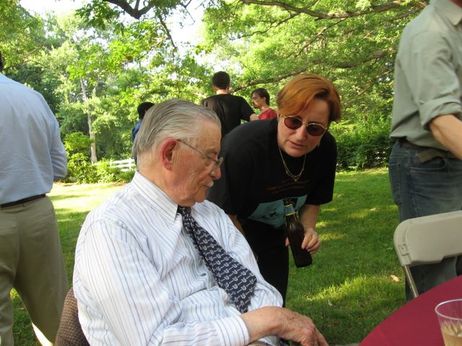 Sandy Peart talking to James Buchanan.  Source of photo:  me.

In an earlier blog entry, I mentioned a comment on disagreeing with journal referees, made by  James Buchanan in conversation at the closing dinner of the 2007 Summer Institute for the Preservation of the History of Economics.

Hayek also came up at the dinner with Buchanan. Buchanan mentioned that he was not as enthused about Hayek’s later work, including The Fatal Conceit, and Law, Legislation and Liberty—he thought the best might have been The Constitution of Liberty.

He mentioned that some foundation had funded a couple of conferences in Europe of top free market scholars to offer advice to Hayek.  They told Hayek that his manuscript was a mess, and that it would be an embarrassment to him to publish it. But he said he was already under contract. (I think this comment referred to The Fatal Conceit.) So someone (Bruce Bartlett?) helped Hayek clean it up.

Buchanan also spoke highly about Rawls.  I think I mentioned that Hayek had said that his approach was similar to Rawls.  I think Buchanan said he did not think that comment was surprising.

I also believe I remember Buchanan saying that he thought more highly of Rawls than of Nozick.