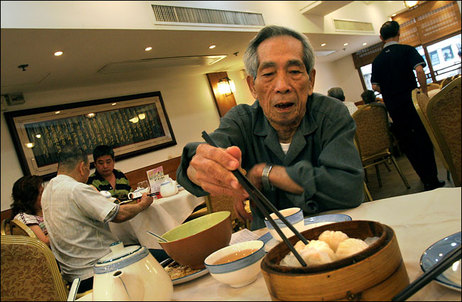 "Wong Yuen enjoying breakfast at a Hong Kong restaurant. The government, he says, "shouldn’t be telling anyone how dim sum should be served.""   Source of caption and photo:  online version of the NYT article quoted and cited below.

"The government is putting its thumb on every part of citizens’ lives, and it shouldn’t be telling anyone how dim sum should be served," said Wong Yuen, a retired mechanic and truck driver who says he has eaten dim sum every morning for the last two decades. "People can make their own decisions. If it’s unhealthy, they can eat less. They don’t need the government to tell them."