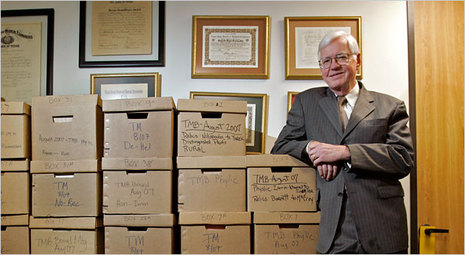 "Dr. Donald W. Patrick, executive director of the Texas Medical Board, with applications for medical licenses sent to it."  Source of caption and photo:  online version of the NYT article quoted, and cited, below.

That is not for an appointment. That is the time it can take the Texas Medical Board to process applications to practice.

Four years after Texas voters approved a constitutional amendment limiting awards in medical malpractice lawsuits, doctors are responding as supporters predicted, arriving from all parts of the country to swell the ranks of specialists at Texas hospitals and bring professional health care to some long-underserved rural areas.

The influx, raising the state’s abysmally low ranking in physicians per capita, has flooded the medical board’s offices in Austin with applications for licenses, close to 2,500 at last count.

“It was hard to believe at first; we thought it was a spike,” said Dr. Donald W. Patrick, executive director of the medical board and a neurosurgeon and lawyer. But Dr. Patrick said the trend — licenses up 18 percent since 2003, when the damage caps were enacted — has held, with an even sharper jump of 30 percent in the last fiscal year, compared with the year before.

“Doctors are coming to Texas because they sense a friendlier malpractice climate,” he said.