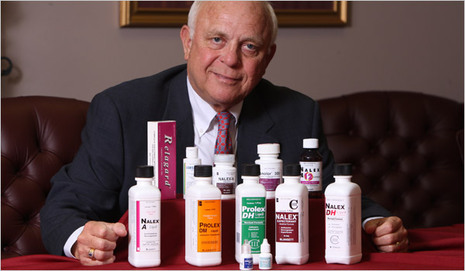 "Larry Blansett, chief executive of the Blansett Pharmacal Company, sells a wide range of what he calls legacy drugs."  Source of caption and photo:  online version of the NYT article cited below.

(p. C1)  In the 1970s, Larry Blansett was producing a wide array of prescription cough syrups, antihistamine tablets and pain killers at the company he co-founded, UAD Laboratories. But the Food and Drug Administration was not keeping a close watch.

Mr. Blansett continues to sell the same range of products at his latest venture, the Blansett Pharmacal Company, which employs about 90 people in North Little Rock, Ark. “We grew gradually at first, but are now a national company,” he said.

Now, however, the F.D.A. has begun to crack down on the thousands of drugs that have never had to go through the agency’s stringent approval process, many of them made by small companies like Blansett Pharmacal. And those companies are crying foul.

Perry Cole, executive director of the Branded Pharmaceutical Association, . . .  said these drugs — the makers call them legacy drugs and define them as (p. C5) drugs that have been prescribed for at least 25 years and have gained a history for safety and efficacy — were far safer than many prescription drugs of recent vintage, like Viagra, which he said had been associated with hundreds of premature deaths.

The agency began its campaign against the makers of unapproved drugs in June 2006, and immediately began ordering companies that made products that it deemed potentially hazardous to file new drug applications or take them off the market.

In December, for example, it told firms to stop making unapproved products containing quinine, which has been used since the 1600s to treat malaria. The one company that made an approved quinine product, Qualaquin, was the Mutual Pharmaceutical Company of Philadelphia, and the F.D.A’s action, in effect, granted Mutual a temporary monopoly.