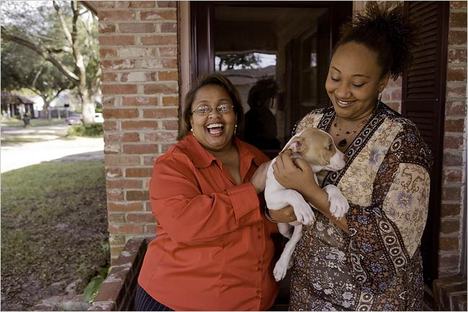 “Carla Reese, left, with her daughter Renee Roussell, who said that “there is nothing to go back to” in New Orleans.” Source of caption and photo: online version of the NYT article quoted and cited below.

(p. A1) LAKE CHARLES, La. — With resignation, anger or stoicism, thousands of former New Orleanians forced out by Hurricane Katrina are settling in across the Gulf Coast, breaking their ties with the damaged city for which they still yearn.

They now cast their votes in small Louisiana towns and in big cities of neighboring states. They have found new jobs and bought new houses. They have forsaken their favorite foods and cherished pastors. But they do not for a moment miss the crime, the chaos and the bad memories they left behind in New Orleans.

This vast diaspora — largely black, often poor, sometimes struggling — stretches across the country but is concentrated in cities near the coast, like this one, or Atlanta or Baton Rouge or Houston, places where the newcomers are still reaching for accommodation.

The break came fairly recently. Sometime between the New Orleans mayor’s race in spring 2006, when thousands of displaced citizens voted absentee or drove in to cast a ballot, and the city election this fall, when thousands did not — resulting in a sharply diminished electorate and a white-majority City Council — the decision was made: there was no going back. Life in New Orleans was over. 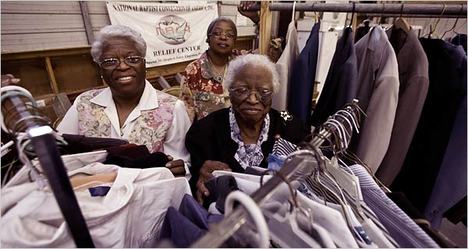 “Cynthia Jones, left, her sister, Pauline Hurst, and their mother, Evelyn Williams, at the church warehouse where they now work.” Source of caption and photo: online version of the NYT article quoted and cited above.