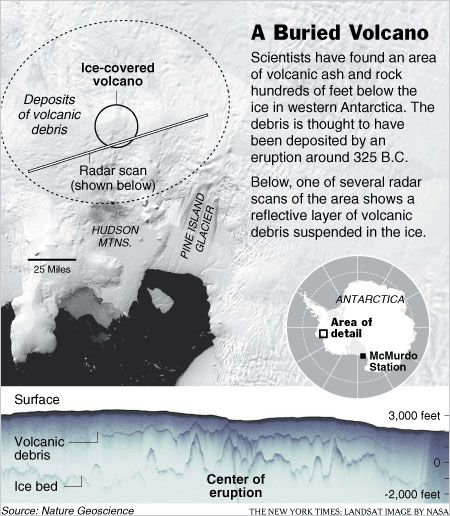 Source of graphic: online version of the NYT article quoted and cited below.

(p. A8) Here is another factor that might be contributing to the thinning of some of the Antarctica’s glaciers: volcanoes.
In an article published Sunday on the Web site of the journal Nature Geoscience, Hugh F. J. Corr and David G. Vaughan of the British Antarctic Survey report the identification of a layer of volcanic ash and glass shards frozen within an ice sheet in western Antarctica.
For Antarctica, “This is the first time we have seen a volcano beneath the ice sheet punch a hole through the ice sheet,” Dr. Vaughan said.
Heat from a volcano could still be melting ice and contributing to the thinning and speeding up of the Pine Island Glacier, which passes nearby, but Dr. Vaughan doubted that it could be affecting other glaciers in West Antarctica, which have also thinned in recent years. Most glaciologists, including Dr. Vaughan, say that warmer ocean water is the primary cause.