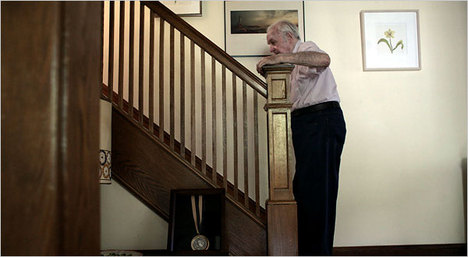 “Climbing stairs is a challenge for George Allen.” Source of caption and photo: online version of the NYT article quoted and cited below.

(p. A1) WASHINGTON — On a bluff overlooking the Potomac River, George and Anne Allen, both 82, struggle to remain in their beloved three-story house and neighborhood, despite the frailty, danger and isolation of old age.
Mr. Allen has been hobbled since he fractured his spine in a fall down the stairs, and he expects to lose his driver’s license when it comes up for renewal. Mrs. Allen recently broke four ribs getting out of bed. Neither can climb a ladder to change a light bulb or crouch under the kitchen sink to fix a leak. Stores and public transportation are an uncomfortable hike.
So the Allens have banded together with their neighbors, who are equally determined to avoid being forced from their homes by dependence. Along with more than 100 communities nationwide — a dozen of them planned here in Washington and its suburbs — their group is part of a movement to make neighborhoods comfortable places to grow old, both for elderly men and women in need of help and for baby boomers anticipating the future.
“We are totally dependent on ourselves,” Mr. Allen said. “But I want to live in a mixed community, not just with the elderly. And as long as we can do it here, that’s what we want.”
Their group has registered as a nonprofit corporation, is setting membership dues, and is lining up providers of transportation, home repair, companionship, security and other services to meet their needs at home for as long as possible.
Urban planners and senior housing experts say this movement, organized by residents rather than government agencies or social service providers, could make “aging in place” safe and affordable for a majority of elderly people. Almost 9 in 10 Americans over the age of 60, according to AARP polls, share the Allens’ wish to live out their lives in familiar surroundings.
. . .
(p. A18) The first village in the Washington area is expected to be on Capitol Hill. When it opens for business on Oct. 1, annual memberships will be $750 for a couple and $500 for an individual.
Among those eager to join are Marie Spiro, 74, and Georgine Reed, 78, who share a rambling house that they insist they will only leave “feet first.” Between them, Ms. Spiro, an emeritus professor of art history and archaeology, and Ms. Reed, a retired designer of museum exhibits, have already endured three knee replacements and an array of other ailments.
Ms. Spiro describes huffing and puffing while grocery shopping; Ms. Reed is increasingly reluctant to visit friends across town. Both women, who are childless, would already welcome help with meals, transportation and paperwork. If they need home care, Capitol Hill Village will be able to organize that.
“I’ve never had to rely on other people, and I never wanted to,” Ms. Spiro said. “But I’d rather pay a fee than have to ask favors.”

For the full story, see:
JANE GROSS “A Grass-Roots Effort to Grow Old at Home The New York Times (Tues., August 14, 2007): A1 & A18.
(Note: ellipses added; caption for the George Allen photo is the online caption, not the different one in the print version of the article.) 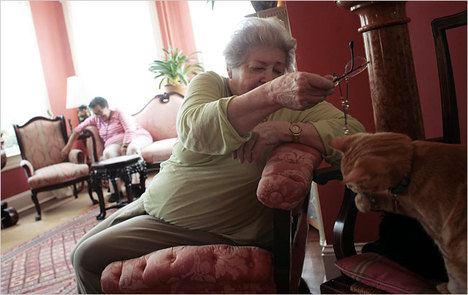 “Georgine Reed, 78, right, and Marie Spiro, 74, share a Capitol Hill home and are joining a group that will help them stay there. “I’d rather pay a fee,” Ms. Spiro said, “than have to ask favors.”” Source of caption and photo: online version of the NYT article quoted and cited above.