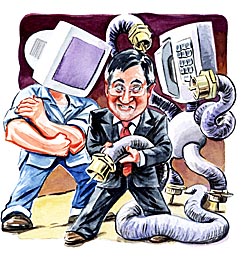 Caricature of Glenn Britt. Source of caricature: online version of the WSJ article quoted and cited below.

(p. B2) WSJ: You invested $550 million in Clearwire Corp., which is building a wireless broadband network. Why?
Mr. Britt: We saw that as a defensive move. The business today is largely about making voice telephone calls, text messaging, and some data.
This venture is about very fast broadband delivery, but the technologies and the products are as yet not fully defined. It’s a bit of a start-up, leap-of-faith kind of thing.
WSJ: What uses could this wireless network be put to?
Mr. Britt: An obvious one is using your laptop in a portable way just as you might today with WiFi hot spots. Another is going to be the PDA, the smallest device you can use to access the Internet. If you have an iPhone you can start seeing what that might look like with a more robust network.
Out in the future, people are talking about machine-to-machine communication, the idea of heart monitors talking to hospitals, your camera automatically uploading photos to Shutterfly or whatever printing service you might use.
WSJ: What about the idea of mobile video delivered to portable devices?
Mr. Britt: I know people talk a lot about mobile video, and I certainly think there is some application for it. But I quite honestly haven’t seen it as a big deal. People do want to get video wherever they are. We already have a robust over-the-air television system which, as it goes digital, will be able to have a mobile component to it. But I don’t know how big the ultimate market is in this country. I’m skeptical.