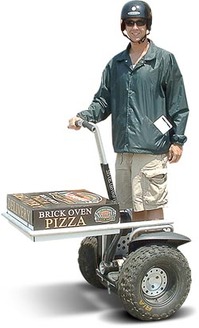 Using a Segway to deliver pizza. Source of photo: online version of the WSJ article quoted and cited below.

(p. B2) With gasoline prices and global warming on their minds, more Americans are getting out of their cars and riding to work — and riding on the job — on the once-maligned Segway.

Scott Hervey of Yorba Linda, Calif., bought one of the electric scooters on June 7 and has put 150 miles on it commuting to his custodian’s job at Disneyland, about 12 miles away. He had considered buying a Segway for four years, and gasoline prices finally drove him to do it. Now he “glides,” as Segway enthusiasts say, to work. “I like passing gas stations,” says the 54-year-old.
The two-wheeled Segway, a self-balancing vehicle that runs on a rechargeable battery, debuted amid massive hype in 2001. Tech icons like Steve Jobs, Apple Inc.’s chief executive officer, and Amazon.com Inc. CEO Jeff Bezos predicted it would change the way people lived. But critics panned the high-tech scooter for its $5,000 price tag and portrayed it as a toy for geeks and the rich. Some cities banned it from sidewalks because of safety concerns.
Today, the Segway is gaining converts. It plugs into a standard electrical outlet and can get up to 25 miles per charge.
Sales at the scooter’s maker, Segway Inc., have risen to an all-time high, says CEO Jim Norrod. The closely held Manchester, N.H., company doesn’t release detailed numbers. (A September 2006 recall showed the company had sold 23,500 Segways.) But Mr. Norrod says he expects sales this quarter to jump 50% from a year earlier, versus a 25% year-over-year increase in the first quarter.