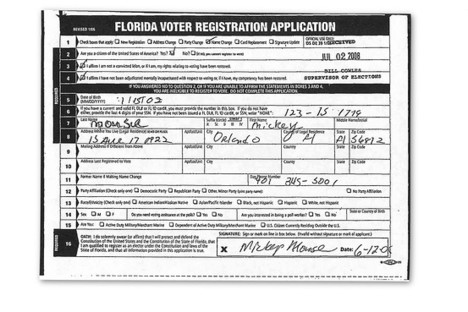 “Suspicious voter registration applications in recent months include this one for Mickey Mouse, of Orlando, Fla.” Source of caption and photo: online version of the WSJ article quoted and cited below.

(p. A13) WASHINGTON — Thousands of suspicious voter registrations collected by the housing-advocacy group known as Acorn have become a rallying point for Republicans, who claim left-leaning activists may be trying to rig votes in the 2008 elections.

Many of the potentially faulty registrations were flagged to election officials as a result of the group’s own internal controls.
Democrats say the Republicans are attempting to whip up fear as a way of discouraging some newly registered voters from going to the polls. If past elections are an indication, such claims also may serve as a way to set up potential legal challenges should close election results produce disputed counts and recounts.
Faulty registrations in recent months include those in the names of Mickey Mouse in Florida, Batman in New Mexico and Dallas Cowboys football players in Nevada. State and federal authorities have opened investigations in about a dozen states; as many as 16,000 registrations in Pennsylvania are under suspicion. The Michigan attorney general’s office Tuesday said it arrested and filed felony charges against a former Acorn canvasser for allegedly forging six voter applications.