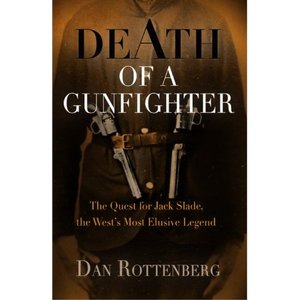 Source of book image: online version of the WSJ book review quoted and cited below.

(p. A15) How exactly did Jack get to be so wild? It appears — and even the redoubtable Mr. Rottenberg acknowledges that the documentation is often sparse — that Jack got into the freight-hauling business and one thing led to another, including stage coaching, supervising the mails and helping to run the Pony Express. In his heyday, Slade was the boss of the Express’s fabled Sweetwater division, said to be the most dangerous stretch of the overland route, from Nebraska to Salt Lake City, 500 hard miles of hard country, hard men, hard weather and unfriendly Indians. One chronicler noted about Slade that “from Fort Kearney, west, he was feared a great deal more than the Almighty.”

Freight hauling was not the space program. A man could get into this line of work easily if he had the physical stamina and the nerve. But it was dangerous work. A man might run into some rough customers. Perhaps the most celebrated of these, in Slade’s case, was an ornery French-Canadian named Jules Beni, with whom he had a long-standing feud. Jules eventually shot Slade, in 1860, riddling him with bullets and leaving him for dead. But Slade was made of tougher stuff and would settle the score. A year later he killed Beni and carried the dead man’s ears around as a souvenir, pulling them out for display from time to time to the alarm of fellow saloon patrons. A previous account of Slade’s life was in fact titled “An Ear in His Pocket.” Now that’s a bad man!

Reference to the book being reviewed:
Rottenberg, Dan. Death of a Gunfighter. Westholme Publishing, 2008.