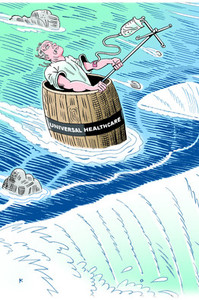 Source of image: online version of the WSJ article quoted and cited below.

(p. A17) In Ontario, Lindsay McCreith was suffering from headaches and seizures yet faced a four and a half month wait for an MRI scan in January of 2006. Deciding that the wait was untenable, Mr. McCreith did what a lot of Canadians do: He went south, and paid for an MRI scan across the border in Buffalo. The MRI revealed a malignant brain tumor.
Ontario’s government system still refused to provide timely treatment, offering instead a months-long wait for surgery. In the end, Mr. McCreith returned to Buffalo and paid for surgery that may have saved his life. He’s challenging Ontario’s government-run monopoly health-insurance system, claiming it violates the right to life and security of the person guaranteed by the Canadian Charter of Rights and Freedoms.
Shona Holmes, another Ontario court challenger, endured a similarly harrowing struggle. In March of 2005, Ms. Holmes began losing her vision and experienced headaches, anxiety attacks, extreme fatigue and weight gain. Despite an MRI scan showing a brain tumor, Ms. Holmes was told she would have to wait months to see a specialist. In June, her vision deteriorating rapidly, Ms. Holmes went to the Mayo Clinic in Arizona, where she found that immediate surgery was required to prevent permanent vision loss and potentially death. Again, the government system in Ontario required more appointments and more tests along with more wait times. Ms. Holmes returned to the Mayo Clinic and paid for her surgery.
On the other side of the country in Alberta, Bill Murray waited in pain for more than a year to see a specialist for his arthritic hip. The specialist recommended a “Birmingham” hip resurfacing surgery (a state-of-the-art procedure that gives better results than basic hip replacement) as the best medical option. But government bureaucrats determined that Mr. Murray, who was 57, was “too old” to enjoy the benefits of this procedure and said no. In the end, he was also denied the opportunity to pay for the procedure himself in Alberta. He’s heading to court claiming a violation of Charter rights as well.
. . .
Canada’s system comes at the cost of pain and suffering for patients who find themselves stuck on waiting lists with nowhere to go. Americans can only hope that Barack Obama heeds the lessons that can be learned from Canadian hardships.