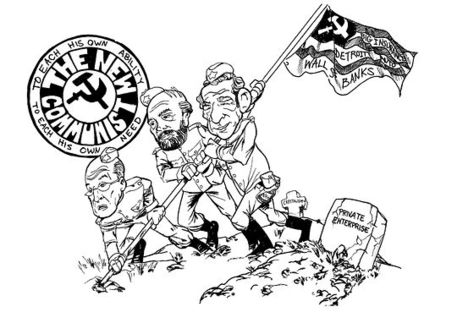 Source of the cartoon: online version of the WSJ quoted and cited below.

You would think that would count as a pretty good paycheck for the Houston energy trader. Instead, the experience left him so angry about the demise of capitalism that he says he has decided to spend his profits on advertisements attacking President George W. Bush’s planned $700 billion Wall Street bailout.
. . .
So he says he bought Goldman Sachs at $129 a share. The stock fell, so he bought more at $100 a share. It fell again, and he bought at $90. The next day it rallied and he sold out at an average price of $130 a share, for a net gain of about $1.25 million over three days of trading, he said.
Trouble was, the stock didn’t rally because of the fundamental strength of the company, Mr. Perkins said. It rallied because the federal government announced that it would rescue Wall Street from its own subprime follies, he said.
“The stock did OK because the government came in and said, ‘No one can fail,'” he said. “It’s capitalism on the way up and communism on the way down.”
His success left him furious, and he decided that someone had to speak out about the damage such a plan would cause to a system based on the premise that risk can bring failure, as well as rewards.