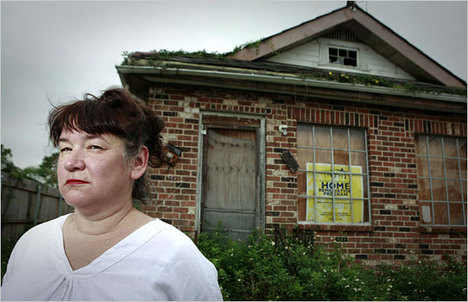 “Karen Gadbois,a New Orleans activist, has helped expose corruption within a federally funded program designed to help rebuild the city.” Source of caption and photo: online version of the NYT article quoted and cited below.

(p. A13) But Ms. Gadbois has a dangerous affection for the city’s shotgun houses and Creole cottages in a place where so much is falling down. She is the daughter of a plaster lather — a textile artist herself, and wife of a painter — and she cannot let the sagging porches and ragged cornices go. They have turned her into a full-time activist.

Lists of homes to which things are going to be done — there are many in post-Hurricane Katrina New Orleans, where nearly 60 percent of the dwellings were damaged in the storm — are red meat for Ms. Gadbois. But this time she did not even need to leave her own house, a rambling, cheerfully messy raised green cottage in the Carrollton section (it took on four feet of water in the hurricane) to know something was terribly wrong with the list of houses NOAH claimed to work on.
“It wasn’t even that the house didn’t exist; the whole block didn’t exist,” Ms. Gadbois recalled. “Something’s not right here. We saw properties that had supposedly been remediated by NOAH coming up to be declared imminent health threats, and then demolished.”
It galled her, she said, that public money was being used to rehab a house, and later to demolish it, often by agencies sharing the same office space.