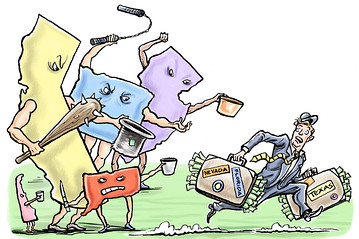 Source of cartoon: online version of the WSJ commentary quoted and cited below.

(p. A17) . . . the evidence that we discovered in our new study for the American Legislative Exchange Council, “Rich States, Poor States,” published in March, shows that Americans are more sensitive to high taxes than ever before. The tax differential between low-tax and high-tax states is widening, meaning that a relocation from high-tax California or Ohio, to no-income tax Texas or Tennessee, is all the more financially profitable both in terms of lower tax bills and more job opportunities.

Updating some research from Richard Vedder of Ohio University, we found that from 1998 to 2007, more than 1,100 people every day including Sundays and holidays moved from the nine highest income-tax states such as California, New Jersey, New York and Ohio and relocated mostly to the nine tax-haven states with no income tax, including Florida, Nevada, New Hampshire and Texas. We also found that over these same years the no-income tax states created 89% more jobs and had 32% faster personal income growth than their high-tax counterparts.
Did the greater prosperity in low-tax states happen by chance? Is it coincidence that the two highest tax-rate states in the nation, California and New York, have the biggest fiscal holes to repair? No. Dozens of academic studies — old and new — have found clear and irrefutable statistical evidence that high state and local taxes repel jobs and businesses.
. . .
. . . , Barry W. Poulson of the University of Colorado last year examined many factors that explain why some states grew richer than others from 1964 to 2004 and found “a significant negative impact of higher marginal tax rates on state economic growth.” In other words, soaking the rich doesn’t work. To the contrary, middle-class workers end up taking the hit.

For the full commentary, see:
ARTHUR LAFFER and STEPHEN MOORE. “Soak the Rich, Lose the Rich Americans know how to use the moving van to escape high taxes.” Wall Street Journal (Mon., MAY 18, 2009): A17.
(Note: ellipses added.)