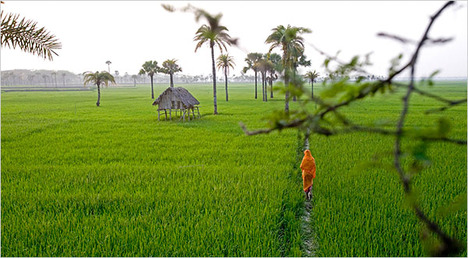 “In Beel Bhaina, a low-lying 600-acre soup bowl of land on the banks of the Hari River, in Bangladesh, land that was once under water is now full of greenery.” Source of photo and caption: online version of the NYT article quoted and cited below.

(p. A6) BEEL BHAINA, Bangladesh — The rivers that course down from the Himalayas and into this crowded delta bring an annual tide of gift and curse. They flood low-lying paddies for several months, sometimes years, at a time. And they ferry mountains of silt and sand from far away upstream.

Most of that sediment washes out into the roiling Bay of Bengal. But an accidental discovery by desperate delta folk here may hold clues to how Bangladesh, one of the world’s most vulnerable countries to climate change, could harness some of that dark, rich Himalayan muck to protect itself against sea level rise.
Instead of allowing the silt to settle where it wants, Bangladesh has begun to channel it to where it is needed — to fill in shallow soup bowls of land prone to flooding, or to create new land off its long, exposed coast.
The efforts have been limited to small experimental patches, not uniformly promising, and there is still ample concern that a swelling sea could one day soon swallow parts of Bangladesh. But the emerging evidence suggests that a nation that many see as indefensible to the ravages of human-induced climate change could literally raise itself up and save its people — and do so cheaply and simply, using what the mountains and tides bring. 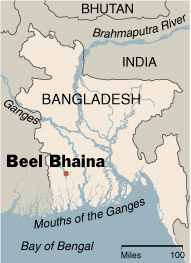 “An influx of silt after a flood made Beel Bhaina higher.” Source of map and caption: online version of the NYT article quoted and cited above.