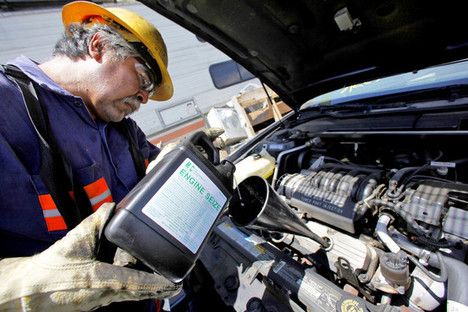 Uncreative destruction. “Jose Luis Garcia pours sodium silicate into a junkyard car engine to render it inoperable at a lot in Sun Valley, Calif., on Tuesday. The process destroys the car’s engine in a matter of minutes.” Source of photo and part of caption: online version of the WSJ article quoted and cited below.

(p. A4) WASHINGTON — Who doesn’t like the government’s “cash for clunkers” program? Your mechanic, for one.

Owners of automotive repair shops say the program to help invigorate sales of new cars is succeeding at their expense.
Bill Wiygul, whose family owns four repair shops in Virginia, said he has already had five or six customers decide against repairs. A man who sits on the board of Mr. Wiygul’s bank traded in his car rather than repair it. “He’d been a customer at our Reston store since it opened,” Mr. Wiygul said.
The clunkers program, formally known as the Car Allowance Rebate System, offers subsidies of as much as $4,500 to consumers who trade in older vehicles and buy new, more fuel-efficient models. The program was initially given $1 billion. That money was spent in one week.
The Senate reached a deal to extend the clunkers program Wednesday night, agreeing to vote on a measure Thursday that would add $2 billion to the program, the Associated Press reported.
The House approve a $2 billion extension last week.
For Mr. Wiygul and other mechanics, until now the recession has brought them more customers as people fixed cars rather than go into debt for new ones. He has hired five people and is expanding one of the shops.
Auto dealers who offer the rebates on new cars in exchange for clunkers must agree to “kill” the old models by disabling the engines and shipping the dead vehicle to a junkyard.
The loss of such potential work — as many as 250,000 vehicles will be destroyed in the program’s first round — prompted Mr. Wiygul to question the federal program’s focus on dealers and big business at the expense of the little guy.
“How do we get on the special interests, special treatment bandwagon? How much is it going to cost me and to whom shall I send the check?” he said. “Who picks the winners in this game ’cause obviously the game is fixed.”