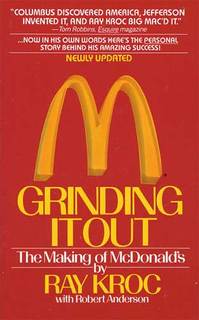 Source of book image: http://media.us.macmillan.com/jackets /500H/9780312929879.jpg (Note: the image is of a more recent edition of the book than the one whose source information is given below. I believe the main body of the editions is the same, but they differ in preface and afterword.)

Ray Kroc was one of the most famous entrepreneurs of the second half of the 20th century, credited with building McDonald’s. Kroc is not my favorite entrepreneur, but his story as portrayed in his autobiography does contain some observations that are useful for suggesting, or testing, generalizations about entrepreneurship.
One of them is suggested by the title: the importance of hard work.
Another is that if you have the right attitude, work hard (and have a bit of luck) success can come later in life (he was 52 when he met the McDonald brothers).
In some future entries to the blog, I’ll quote a few passages from the book that I found especially interesting.