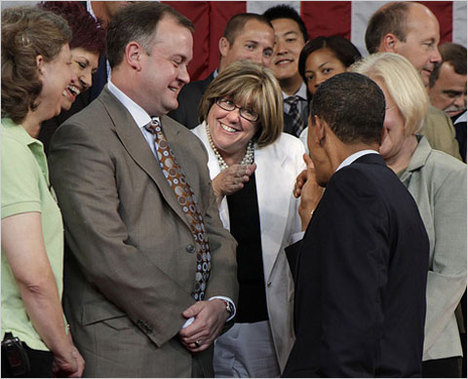 “No, I mean it,” said Ms. Brigugulio, “I expect you to keep your word on this.” Source of the photo and caption: http://boss.blogs.nytimes.com/2009/07/30/mr-prez-meets-ms-biz-the-story-behind-the-photo/

(p. A11) Patty Briguglio thinks President Obama may have a public relations problem selling his health care plan to small-business owners.
And Ms. Briguglio, who was photographed exchanging a wagging finger with the president at his health care forum Wednesday in Raleigh, N.C., should know: she runs her own small business, MMI Associates, a public relations firm in Raleigh.
Ms. Briguglio pays much of the cost of health insurance for her firm’s 19 employees, though she does not offer a group plan. Because the members of her staff are so young, it is cheaper simply to provide an allowance for them to buy individual policies.
When Mr. Obama called on Ms. Briguglio at Wednesday’s forum, she asked, ”What current long-term social program created and run by the government should we look to as a model of success and one that we as taxpayers should be confident that a new government-run health care system would be better than the current system in place?”
The president suggested Veterans Affairs hospitals and Medicare, both of which, he said, ”have very high satisfaction rates.”
And, he added, ”Medicare costs have gone up more slowly than private-sector health care costs.”
Ms. Briguglio was not completely satisfied. ”I’ve never associated any government program with ‘cost effective’ or ‘efficient,’ ” she said in a telephone interview on Thursday. ”I don’t believe that the government will be a better steward of the money that I set aside for health care for my employees than I will be.”

ROBB MANDELBAUM. “To Challenges For Obama, Add Another.” The New York Times (Fri., July 31, 2009): A11.
(Note: the online version of the article does not have the photo of Briguglio wagging her finger, that was published in my print version of the paper. The photo above is from later in the exchange, and appeared on the NYT blog.)